'Bad Noose': Worldwide Executions Are Falling, But Death Sentences on the Up 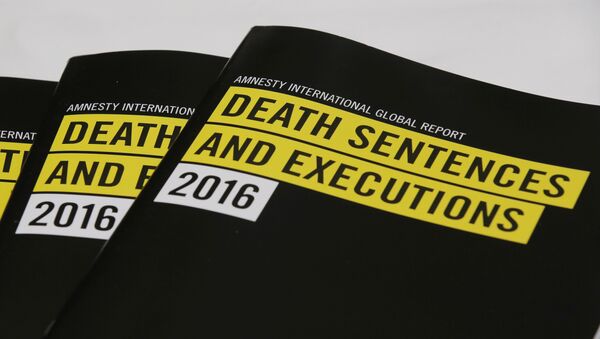 © AP Photo / Kin Cheung
Subscribe
Amnesty International's review of the death penalty worldwide in 2016 paints an - at times - woeful picture. As of December 31, 2016, at least 18,848 people are imprisoned worldwide, awaiting execution by the state - perhaps by hanging, or beheading, or firing squad or lethal injection.

Moreover, Amnesty International (AI) believes the true total is in fact much higher, as China and Saudi Arabia, two of the world's most enthusiastic executioners, class data on death penalty usage as a state secret — as a result, the organization suggests many thousands more were killed "off the books" over the course of the year.

While 141 countries worldwide, more than two-thirds, are abolitionist in law or practice, only 104 of the world's 198 countries have fully abolished it — and 3,117 were sentenced to death in 55 countries in 2016, a significant increase on 2015's total — 1,998 sentences in 61 countries. AI acknowledges this rise may be attributable to authorities in certain countries providing the group with detailed information for the first time.

The right to life applies to everybody, no matter what the crime. Abolish the #deathpenalty https://t.co/rWDPHyIgWD pic.twitter.com/Tsm5wFcPy4

AI also found that in many countries where people were executed or sentenced to death, proceedings did not meet international judicial standards, with confessions being extracted via torture.

The use of the death penalty in Sub-Saharan Africa provided a mixed picture — fewer executions were recorded, but the number of death sentences imposed rose 145 percent to 1,086, primarily due to a huge increase in Nigeria. At least 22 executions were carried out in five countries, compared to 43 executions in four countries in 2015.

The #deathpenalty is final. An execution can never be reversed. https://t.co/u2ApW9OUee pic.twitter.com/WROufMKeT8

In Europe, Belarus is the only country to retain the death penalty — executions resumed after a 17-month hiatus, despite promises to end the practice. Other governments did end the practice, in Benin, Nauru and the US state of Delaware.

True or false? The movement to abolish the #deathpenalty reflects only western values.

For the first time since 2006, the US did not rank in the world's top five executioners, falling to seventh behind Egypt.

Arkansas in Desperate Race to Find Enough Drugs to Execute 8 Men in 10 Days
In all, 20 were executed in the country — the lowest number since 1991, half the rate of 2007 and a third of 1997. Still, 2016 marked the eighth consecutive year in which the country was unique in the Americas for executing prisoners.

Furthermore, the number of executions carried out in Georgia almost doubled compared to 2015, from five to nine — and 2,832 remain on death row as of January 2017.

One man awaiting execution is Jason McGehee, in the state of Arkansas. Arkansas has not executed a single prisoner since 2005, but is now rushing to slay eight men, including McGehee, in the span of 10 days. The reason for the rush is the state's supply of execution drug Midazolam surpasses its use-by-date May 1.

Finding a new killing solution may not be so easy — import regulations prevent European providers sending supplies to US authorities. It may be this embargo that accounts for the US dropping out of Amnesty's top five in 2016.