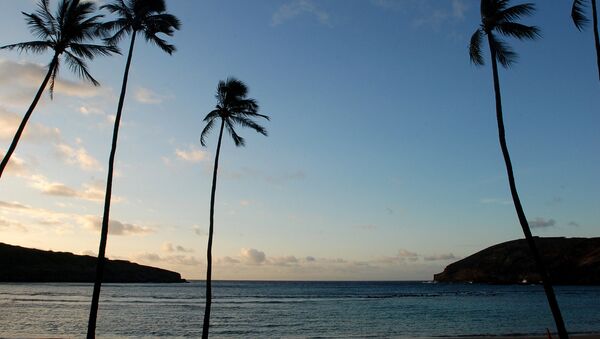 © AP Photo / Caleb Jones
Subscribe
International
India
Africa
Nuclear weapons experts aligned with the US military are claiming that Pyongyang has, or will soon have, the capability to drop an atom bomb on the Hawaiian islands.

Marking heightened military rhetoric around what is claimed to be a growing nuclear threat by Pyongyang, Air Force General Lori Robinson, North American Aerospace Defense Command head, claimed that, "North Korea's unprecedented level of nuclear testing and ballistic missile development offers a sobering reminder that the United States must remain vigilant against rogue nation-states that are able to threaten the homeland."

Other sources observed an incipient threat to US territories by pointing out the many US military command facilities on the mid-Pacific islands, and suggesting that Hawaii is no longer prepared for an attack, as it once was during the previous century's Cold War.

Toby Clairmont, executive officer of the Hawaii Emergency Management Agency, detailed that the 20th century's numerous well-stocked nuclear fallout shelters in the state have mostly fallen into disuse, as the fear of nuclear attack diminished following the dissolution of the former Soviet Union.

Of the hundreds of nuclear fallout shelters on the island of Oahu, a major military command center, barely a handful remain useable, and all are out of date after funding was withheld for their upkeep, Clairmont said, according to the Honolulu Star-Advertiser, cited by Military.com.

Not everybody is adopting a full-blown duck-and-cover mentality regarding the risk of imminent nuclear attack by Pyongyang, however. Hawaii's Emergency Management administrator, Vern Miyagi, while recommending that the island's nuclear attack preparedness plans be updated, remarked that, "If you were to ask me what is the status of North Korea, and is [a missile attack] a high probability — no, it's a low probability."

The retired two-star general did say, however, that, "we have to keep a lookout for that [the nuclear threat]. That's why we're talking about updating the plan. It's an awakening. Maybe we should get involved."

His plans involve creating a new protocol that, while including the venerable and widely-debunked duck-and-cover survival method, would seek to identify the locations of the many forgotten nuclear protection bunkers on the islands.

"The bottom line in our plan right now," said Miyagi, "is close coordination with Pacific Command, the military side, so that we understand what's happening, and we can prepare for it with what we have — and what we have right now is very thin."

Military experts seeking to ratchet up the threat suggest that a North Korean ICBM, if such a device actually exists, could theoretically make it to Hawaii in less than 20 minutes, leaving no opportunity to warn residents to do anything other than crawl under furniture.