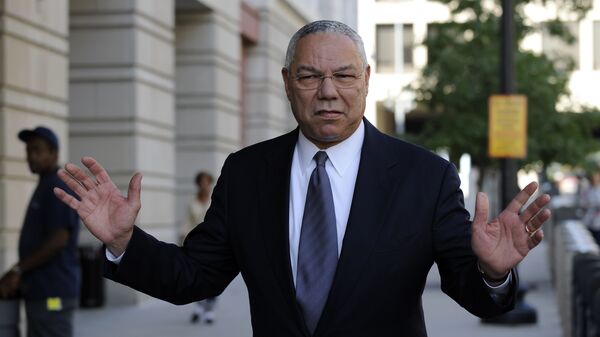 US Secretary of State Rex Tillerson should apologize to Russian Foreign Minister Sergey Lavrov for his claims about Russia's alleged failure to destroy Syrian chemical weapons, as such accusations are "preposterous," Col. Lawrence Wilkerson, the former Chief of Staff to US Secretary of State Colin Powell, said on Tuesday.

MOSCOW (Sputnik) – On April 9, Tillerson said that during the talks with Lavrov scheduled for Wednesday he was going to call on Moscow to fulfill its obligations under the agreement on eliminating Syrian chemical weapons adding that Russia failed to do that so far.

“I think the first thing Tillerson gonna do is to explain Sergey [Lavrov] the less than truth that Tillerson has been spreading around the world – and that is that Russia was responsible for the destruction of Syria’s chemical weapons stocks … To blame Russia for the failure as for destruction of Syria’s chemical weapons is preposterous and I hope Tillerson would apologize to Sergey [Lavrov] for that,” Wilkerson told RT broadcaster.

Wilkerson pointed out he could not believe the United States was lying this way adding that the US army was involved in destruction of Syrian chemical weapons itself.

“The US army and its contractors destroyed 600 metric tons of Syria’s chemical weapons stocks. The entire operation was under the Organization for the Prohibition of Chemical Weapons (OPCW) and the United Nations – it was not just Russia that was responsible [for] that," he added.

Mattis Confident US-Russia Ties Won't Get Out of Control After Attack on Syria
On April 4, a chemical weapons incident in Syria’s Idlib province claimed the lives of some 80 people and inflicted harm on an additional 200 civilians. The Syrian National Coalition of Revolutionary and Opposition Forces, as well as a number of Western states, accused the Syrian government troops of carrying out the attack, while Damascus refuted these allegations, with a Syrian army source telling Sputnik that the army did not possess chemical weapons.

Earlier this year, Syrian President Bashar Assad said that the country’s government had never used weapons of mass destruction, including chemical weapons, against the Syrian people. Besides, under a Russian-US deal after the east Ghouta sarin gas incident in 2013, Damascus joined the Convention on the Prohibition of Chemical Weapons and agreed to destroy its stockpile under OPCW oversight. In January 2016, the OPCW announced that all chemical weapons in Syria had been destroyed.