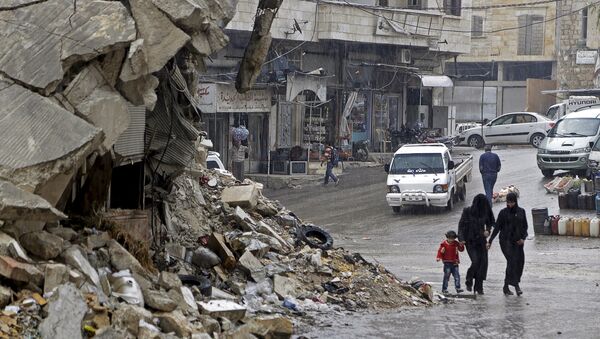 The White Helmets, a volunteer force operating in terrorist-controlled areas of Syria that claims to be a "search and rescue" team, released a fake video pretending to show the effects of a gas attack carried out by the Syrian army, Professor Marcello Ferrada de Noli of Swedish Doctors for Human Rights, told Radio Sputnik.

According to the independent organization Swedish Doctors for Human Rights, the video shot by White Helmets group purporting to show a chemical attack in the Idlib province of Syria in March 2015 is clearly a fake.

The self-styled Syria Civil Defense, also known as the White Helmets, is an organization working in rebel-controlled areas of Syria which claims to carry out "search and rescue" operations.

Their members have been hailed as heroes by the mainstream media and a propaganda film praising their activities even won an Oscar earlier this year.

However, the group, which receives funding from outside Syria, is dogged by accusations of links to terrorist groups operating in Syria, including Jabhat al-Nusra.

In March 2015, the White Helmets claimed that the Syrian army carried out a chemical gas attack in Idlib province. They published pictures online of the alleged attack and a video purporting to show a child suffering from the effects of a poison gas attack, being treated by medics.

Professor Marcello Ferrada de Noli, founder and chairman of Swedish Doctors for Human Rights, told Radio Sputnik that the video doesn't present any proof it was shot in Idlib, nor were the medical procedures shown appropriate for a chemical gas attack.

"In the opinion of our doctors, these procedures were non-medical, non-lifesaving and even counter-productive in terms of life-saving purposes for children," Noli said.

"In this particular case, this was referred to as an alleged gas attack, and then we have the videos showing what was going on in an emergency room but nothing from the attack itself."

"Nothing about what was going on outside the room and other evidence that would have been important in order to evaluate the correspondence between the life-saving procedures and the agent that was producing those injuries."

Syria: The Toxic Meltdown
Noli said that allegations about the gas attack appeared at the same time as renewed calls for the establishment of a no-fly zone in Syria, which would play into the hands of armed opposition groups.

"They (allegations about chemical weapons attacks) have been put forward simultaneously with the request to Western powers to establish a no-fly zone in Syria. So, of course, this reference should make us very cautious as to whether there really was a gas attack."

"If you consider that Syrian opposition forces, that coalition, renewed their petition for a non-flight zone in Syria two or three days ago, then I think that the conclusion is rather obvious," Noli said.

The doctor said that the White Helmets' assertions need to be assessed by experts before they can be believed. In addition to the false allegation in Idlib, the White Helmets have previously spread false reports about a Russian airstrike in Homs and produced a "mannequin challenge" video in which they faked a rescue.

"It is absolutely necessary for an expert to examine that evidence – what is a fact, what is a fantasy, what is a fake and trying to deceive the public with the political purpose of establishing a no-fly zone in Syria which would have enormous consequences in geopolitical terms."

"This will be a long procedure and not all the so-called human rights organizations operating in this world are willing to assess events on behalf of the truth," Noli said.