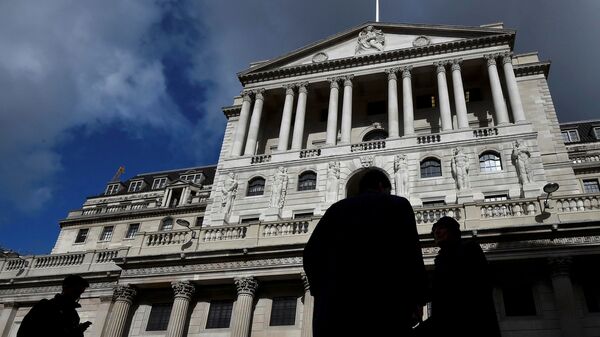 A secret recording implicating the Bank of England in the Libor rigging scandal has been uncovered, the first potential "smoking gun" evidence of the central bank's long-suspected role in compelling UK commercial banks to artificially drive down their lending rates during the financial crisis.

Libor — the London Interbank Offered Rate — tracks how much it costs banks to borrow money from each other, heavily influencing the cost of mortgages and other loans for regular customers. Sometimes called "the world's most important number," prior to the scandal, banks had dedicated members of staff — Libor submitters — who would calculate every day how much it cost the bank to borrow money, and submit the figures to the British Bankers' Association (BBA).

The BBA would then set the overall Libor rate according to the average of all banks' aggregate borrowing costs.

If the Bank of England influenced Barclays then some heads have to roll. I now have no doubt the government and BoE are in collusion. #libor

Implications of collusion between Bank of England and Barclays colluding over libor fixing are immense. No wonder media diversion under way.

"You're going to absolutely hate this, but we've had some very serious pressure from the UK government and the Bank of England (BoE) about pushing our Libors lower," Dearlove is recorded as saying.

Johnson objects to the demand, saying it would mean breaking the rules on setting Libor, but Dearlove dismisses his concerns, saying he was being pressured by "all sorts of people," including the Bank of England to do so.

Barclays was not the only UK bank embroiled in the Libor scandal — in all, UK banks have been fined US$7.5 billion (£6 billion) for their role in the impropriety.

Consultancy KPMG has calculated UK financial institutions spent 61 percent of their profits in the period 2012 — 2015 on "remediation costs" for a variety of financial misconduct, such as Libor and Forex market rigging, money laundering and violating international trade sanctions.

My house was repossessed with a loan that used LIBOR. My family was broken up, we were all made homeless. This affected real people #Libor

Both Tucker and Diamond were called to give evidence to the Treasury Select Committee on rate rigging in 2012, at which both said they had only become recently aware of the practice of lowballing. Tucker subsequently became Deputy Governor of the Bank of England, Diamond left Barclays in 2013 and founded mining company Atlas Mara. In 2016, Peter Johnson, Barclays' Libor submitter, was jailed after pleading guilty to manipulating Libor, in response to requests from four separate Barclays traders. The traders were also jailed.

I've been saying for 2 years BBA told banks to lowball libor. But whistleblowers are ignored — what do they know?

Chris Philp MP, a member of the UK Treasury Committee, said the recording suggested Diamond and Tucker had misled parliament.

"That is contempt of parliament, a very serious matter. I think we need to urgently summon those individuals back before Parliament to explain why it is they appear to have misled MPs. It's extremely serious," Philp added.

Shadow Chancellor John McDonnell called for a "high level investigation" of the conversation.

"This revelation contradicts past assurances about the role of the Bank of England in the Libor scandal. It goes to the very heart of whether our financial institutions can be trusted. Therefore it warrants an immediate high-level investigation, and the Chancellor must act straight away to ensure this happens," McDonnell said.

In a statement, the BoE said it had been assisting the Serious Fraud Office's criminal investigations into Libor manipulation at commercial banks by providing, on a voluntary basis, documents and records requested by the body.