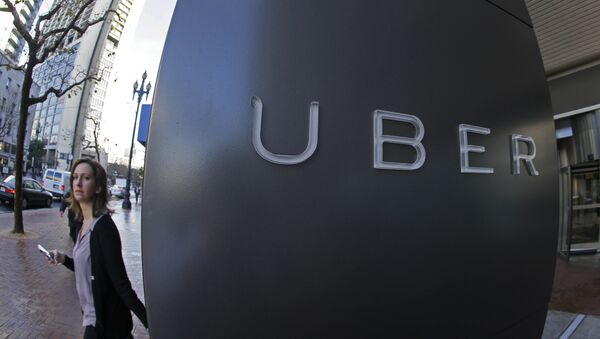 © AP Photo / Eric Risberg
Subscribe
It seems residents of The Boot will be doing a bit more walking. An Italian court has banned beleaguered ride-sharing company Uber from operating in the country, citing unfair business practices as the reason for the expulsion.

The court argued that Uber does not respect Italian transportation laws, in particular the law that states all transportation fees must be determined by the national transportation authority. The suit was filed by Uber's natural enemy: an association of traditional taxi cabs.

The decision, which was handed down Friday, gives Uber ten days to cease operations in the Southern European nation. For every day that they operate past that, they will have to pay a fine of 10,000 euros ($10,600).

Back At It: Uber Resumes Self-Driving Car Program After Weekend Crash

A representative from Uber Italy's legal division told Milanese daily newspaper Corriere Della Sera that they were "shocked" at the decision.

"We're shocked. We will appeal this ruling that is based on a 25-year-old law. Now the government can't waste more time and needs to decide whether it wants to remain anchored to the past, protecting privileged profits, or whether it wants to allow [Italians] to benefit from new technologies," they said.

"The most striking form of unfair competition" that is referred to above is UberPop, the low-cost option equivalent to UberX in the US. European nations such as Belgium, France, Germany, and Sweden have also put a halt to UberPop. Uber was also banned from Spain in 2014 for similar reasons of unfair competition.

On the opposite end of Europe, Uber voluntarily decided to withdraw from Denmark in late March. The decision, which will go into effect on April 18, was made in response to a new set of regulations on taxi services that include mandatory fare meters and seat sensors.

In January 2017, Uber also sold their infrastructure to Chinese competitor Didi Chuxing due to Beijing-mandated regulations favoring domestic companies. In 2015, Uber was briefly banned in South Korea as well for skirting Seoul's regulations, but an agreement was reached and they resumed services later that year.

000000
Popular comments
"We're shocked. We will appeal this ruling that is based on a 25-year-old law." Since when a business company had the right to decide a foreign contry's Laws??? This is typical of Americans' arrogance and bullying, they pretend to rule the world!
loverussia
11 April 2017, 02:18 GMT1
000000
Not here in Australia, our governments bow down to any US corporations.
tony p
11 April 2017, 12:31 GMT
000000
Newsfeed
0
New firstOld first
loader
LIVE
Заголовок открываемого материала
Access to the chat has been blocked for violating the rules . You will be able to participate again through:∞. If you do not agree with the blocking, please use the feedback form
The discussion is closed. You can participate in the discussion within 24 hours after the publication of the article.
To participate in the discussion
log in or register
loader
Chats
Заголовок открываемого материала
Worldwide
InternationalEnglishEnglishMundoEspañolSpanish
Europe
DeutschlandDeutschGermanFranceFrançaisFrenchΕλλάδαΕλληνικάGreekItaliaItalianoItalianČeská republikaČeštinaCzechPolskaPolskiPolishСрбиjаСрпскиSerbianLatvijaLatviešuLatvianLietuvaLietuviųLithuanianMoldovaMoldoveneascăMoldavianБеларусьБеларускiBelarusian
Transcaucasia
ԱրմենիաՀայերենArmenianАҧсныАҧсышәалаAbkhazХуссар ИрыстонИронауОssetianსაქართველოქართულიGeorgianAzərbaycanАzərbaycancaAzerbaijani
Middle East
Sputnik عربيArabicArabicTürkiyeTürkçeTurkishSputnik ایرانPersianPersianSputnik افغانستانDariDari
Central Asia
ҚазақстанҚазақ тіліKazakhКыргызстанКыргызчаKyrgyzOʻzbekistonЎзбекчаUzbekТоҷикистонТоҷикӣTajik
East & Southeast Asia
Việt NamTiếng ViệtVietnamese日本日本語Japanese中国中文Chinese
South America
BrasilPortuguêsPortuguese
NewsfeedBreaking
09:40 GMTChild Abusers in UK Could Face Up to Life in Prison – Government
09:40 GMTCrown Prince Says Japan Needs Norms Against Media Slander
09:00 GMTUS to Upgrade Military Infrastructure, Develop New Bases in Australia, Guam to Counter China
08:53 GMTMoscow Rejects US Claims on Religious Persecution in Russia, Pledges Retaliation
08:44 GMTGhislaine Maxwell Likened to 'Eve in Garden of Eden' For Being 'Vilified' For Epstein's Sex Crimes
08:28 GMTCOVID-19 Live Updates: China Says 2022 Winter Olympics to Be Held as Planned Despite Omicron Spread
08:27 GMTCasualties Feared as Military Helicopter Crashes in Azerbaijan
08:15 GMTEt Tu? US Steals Most of Australia's Sale to China Amid Trade Row, Finds Study
07:49 GMTModerna CEO Thinks COVID-19 Vaccines Will Lose Efficacy Due to Omicron Strain
07:48 GMTLawyer Calls Jussie Smollett 'Real Victim' as Prosecutor Slams Actor's 'Secret Plan' for Hate Hoax
07:14 GMTBiden Axes Supply Chain Crisis Address, Seeks 'Ample Time' to Meet Business Leaders at White House
06:55 GMTSwedish Professor Pins COVID-19 Mutations on Skewed Vaccine Distribution
06:51 GMT'Happy Day': Indians Excited as Parag Agrawal Appointed Twitter CEO
06:45 GMTBill Seeks to Bar Politicians With Criminal Charges From Serving as Israeli PM, But Is It Realistic?
06:34 GMTJapan Supports Postponement of WTO Meeting Due to Omicron Variant
06:22 GMT'Insult to Legacy': Gucci Heirs Threaten Lawsuit Over 'House of Gucci' Movie
06:09 GMTFamily in India 'Robbed on Pretext of Vaccination Against Omicron Strain'
06:09 GMTPolice Reportedly Search Marilyn Manson's LA Home Amid Probe Into Sexual Assault Claims
06:01 GMTIslamists, Terror Financiers and Motorcycle Gangs Reportedly Received COVID-19 Aid in Sweden
05:28 GMT'Shine Like a Diamond': Barbados Declares Rihanna National Hero as Island Becomes Republic - Videos