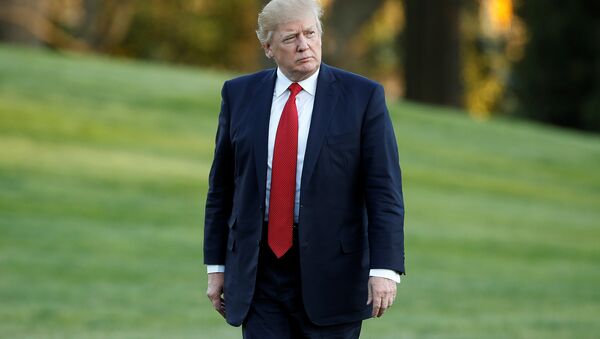 John Wight
All materials
"A cloud no bigger than a man's hand can be a harbinger of great storms to come." So goes the biblical injunction and so are the potential ramifications of one "proportionate" and "limited" US airstrike carried out against a Syrian airbase, which in of itself was the military equivalent of a slap rather than a punch.

However the symbolism, breach of trust, and return to a world in which Washington asserts the right to act as the judge, jury, and executioner of international law instead of being bound by it has been mesmerizing in its imperial and colonial arrogance, not to mention contempt for a world already scarred by too many years of US hegemony and domination.

In embarking on this reckless act of vigilante justice against a sovereign state, President Trump proves he cannot be trusted to act rationally and with restraint in the midst of a crisis. In so doing, he has shattered any prospect of forging a partnership with Russia against a terrorist menace that recent events have once more confirmed threatens citizens of both countries in equal measure.

Just after he was elected president in November 2016, I was writing, "Donald Trump's pledge to embark on a new direction when it comes to US foreign policy is both welcome and necessary. However if he is to succeed, he will first have to slay the beast of neo-conservatism in Washington."

Five months on we are left in no doubt that rather than slay neo-conservatism, Trump has been slayed by a neocon establishment that is determined to embark on a new Cold War, one that has never been closer to turning hot. It comes as confirmation that his administration now conforms to the adage, "Meet the new boss, same as the old boss."

For Russia the message sent by this airstrike could not be clearer. Under Trump's watch there will be no relationship of equals and no multipolar world. It means that the lessons of the disastrous consequences of the alternative in the shape of US unipolarity — i.e. Iraq, Afghanistan, Libya, and the eruption and spread of Salafi-jihadi terrorism — have been completely and egregiously ignored, sacrificed to expediency on the part of a President who has decided to abandon the pledges made during his election campaign when it came to departing from his predecessors on matters of foreign policy.

One wonders if he or his team have stopped to consider that with this unilateral action, all of a sudden the presence of NATO troops and aircraft close to Russia's borders, along with the missile defense shield in Romania, have been turned from a security concern into an imminent threat, one that amounts to a dagger pointed at Russia's heart.

Trump said that the footage of children dying such agonizing deaths in the town of Khan Sheikoun in Idlib province in the wake of this alleged chemical weapons attack is what prompted him to act. Such an emotional response from a man in possession of America's nuclear codes entitles us to infer that the dozens of children blown to smithereens in Mosul recently, courtesy of US bombs, did not induce any emotional response in the Oval Office.

Or how about the Yemeni civilians, including children, who are being blown to smithereens on a daily basis, courtesy of US-manufactured and supplied munitions to Washington's Saudi ally?

Yemen: The Forgotten War. Over the past year the world has turned its back @amnesty https://t.co/7B9SSDpsSq pic.twitter.com/Hw5C274sHO

Have we now entered an age where anguish over the killing of the innocents is calibrated according to who is responsible for their deaths? Is this how low the hypocrisy in Washington has descended?

Returning to the awful events of Khan Sheikoun, nobody at this stage knows beyond reasonable doubt who or what was responsible, with the Syrians denying they dropped sarin or any other chemical weapon on the town, as alleged by Washington and its partners.

Damascus claims that its aircraft did carry out an airstrike in the area, and that it destroyed a warehouse where Salafi-jihadi groups were storing chemical weapons.

Chemical Weapons Attack on Idlib: Why Questions Need to Be Asked
Two competing narratives on the same event and therefore grounds for an independent UN-led investigation in order to ascertain which one is accurate and which is false. Russia has called for such an investigation, as have the Iranians, yet in Washington those calls have been contemptuously dismissed, swept aside in service to a rush to judgement and, with it, a hail of tomahawk missiles.

It is a rush to judgement that invites the question: what are the Americans afraid of? Is this a repeat of the UN investigation into whether Saddam possessed WMD back in 2003, when Hans Blix and his investigation team were precipitately withdrawn from Iraq at the point at which it had become obvious they were about to confirm that Iraq did not have any WMD, thus destroying the then-Bush administration's pretext for unleashing a war it had already decided was going to be unleashed no matter what?

In the absence of any such investigation concerning Idlib, here is what we do know beyond doubt:

1. The Syrians had no motive for carrying out this attack. It came at a point in the conflict when pro-government forces were enjoying the kind of momentum they have not enjoyed in five years. It also came just after the Trump administration had confirmed that regime change in Syria was no longer an objective, that its priority was defeating terrorism. With this in mind, for President Assad to authorize this attack — and given how close the alleged chemical weapons attack of 2013 came to precipitating military intervention then — this would conform to the actions of man who was intent on bringing about his government's demise.

2. All the footage of the aftermath of the Idlib event has come from pro-opposition sources. While this does not automatically invalidate the footage's authenticity or accuracy, it does require us to be careful not to blindly take it as read. No Western journalist or news crew would dare set foot in Idlib, or any other part of opposition-held territory in Syria for that matter. They know that as soon as they did they would be abducted and slaughtered.

3. In 2014, the Organization for the Prohibition of Chemical Weapons (OPCW) confirmed that all declared stocks of chemical weapons held by the Syrian government had been destroyed, per the agreement brokered with the Syrians and the Americans by Russia in the wake of the attack on eastern Ghouta, just outside Damascus, in August 2013. The OPCW is an international organization whose work and convention are supported by Washington. The rationale that the Syrians had, in violation of the agreement, retained chemical weapons stocks, does not add up when we consider the damage it would do to its alliance with Russia, not to mention the dire consequences, should the fact it had held onto some, become known.

Thus far one of the most egregious aspects of this current crisis has been the extraordinary histrionics of Trump's UN envoy, Nikki Haley, at the UN. At the emergency session of the security council, called after the alleged chemical weapons attack occurred, she got out of her chair and produced images of dead children, which she proceeded to brandish at her Russian and Syrian counterparts. As she did, the world's collective memory was transported back in time to the very same locale fourteen years previously, when then US Secretary of State, Colin Powell, brandished a tiny vial as he indulged in one of the most shameful and dishonest speeches the UN has ever witnessed in its 70-year history.

Speaking for the countless victims of America's brutal war on Iraq was Bolivia's UN envoy, Sacha Llorenti. Himself brandishing the image of Powell at the UNSC on that infamous day, he reminded the US and the world of the lies that were told to justify the war on the Iraqi people. Mr. Llorenti said:

"We were told that there were weapons of mass destruction in Iraq and this was the motivation for the invasion. After the invasion there were 1 million deaths and it launched a series of atrocities in that region. Could we talk about [the Islamic State] if that invasion had not taken place? Could we talk about the serious and horrendous attacks in various parts of the world if that illegal invasion had not taken place? I believe it is vital to remember what history teaches us."

Never was a truer word spoken.