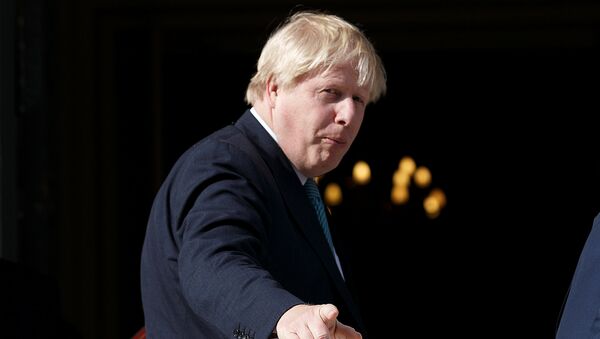 World
Trump Considering Sanctions Against Russia, Iran for Supporting Syria
In an interview with Sputnik, Russian political analyst Alexey Zudin expressed doubt over the G7 countries' willingness to agree with the UK Foreign Secretary's latest demand to inflame the sanction war with Russia.

The interview came after The Times reported that during the upcoming G7 foreign ministers' meeting in Italy, British Foreign Secretary Boris Johnson will urge the G7 member states to tighten sanctions against Russia following the latest developments in Syria.

The newspaper said that "Britain is pushing western nations to impose new sanctions on Russia if it fails to cut ties with President Assad as the conflict over Syria escalates."

G7 Foreign ministers meeting in Italy today, with Syria on the agenda and how to get Russia to distance itself from Assad.

According to The Times, the document was prepared ahead of the G7' ministerial meeting which kicks off in Lucca, Italy, later on Monday. The newspaper said that Johnson wants the G7 to issue a joint statement after an alleged chemical attack in Syria, according to which Russia should stop supporting Syrian President Bashar Assad and withdraw its troops from Syria.

In case of Moscow's refusal, new sanctions will follow in addition to those already slapped on Russia in connection with the situation in Ukraine, according to The Times.

Alexey Zudin, of the Moscow-based Institute for Social, Economic and Political Studies think tank, said that this move, initiated by Washington and London, is unlikely to be supported by other G7 countries.

"It is unlikely G7 members will agree to this, at least for now. It seems that the absence of proof [pertaining to the Syria chemical attack] has not put off the main initiator, the US, and its closest ally Britain, which is not the case with other G7 countries who are hardly likely to support the American position," Zudin said referring to "clear collaboration between Washington and London on the issue."

According to him, this move is timed to coincide with the visit of US Secretary of State Rex Tillerson to Moscow, which begins on April 11.

"It would be pointless for Tillerson to start his visit with a direct threat to his Russian colleagues, about the US preparing a new package of anti-Russian sanctions, which is why this role was delegated to UK Foreign Secretary Boris Johnson," Zudin concluded.

Meanwhile, Kremlin spokesman Dmitry Peskov said that Moscow is not aware of any possible new US sanctions against Russia over Syria, as neither President Donald Trump or his administration have made any statements.

US Ambassador to the United Nations Nikki Haley said on Sunday that Trump and members of his team "have started to have" conversations related to imposing sanctions on Russia and Iran in connection to their support for Damascus.

"Yes, there was a statement by the US ambassador, but we have not heard about any statements to this effect from President Trump or his representatives," Peskov said.

Last Thursday night, at least five people were killed and seven others injured after the United States launched 59 Tomahawk cruise missiles at the Syrian military airfield in Ash Sha'irat, located about 40 kilometers (25 miles) from the city of Homs.

New Sanctions Against Russia 'Part of a Deal Between Trump, US Establishment'
Syrian President Assad argued that his government has no chemical weapons left, and never used the stockpile Syria used to maintain.