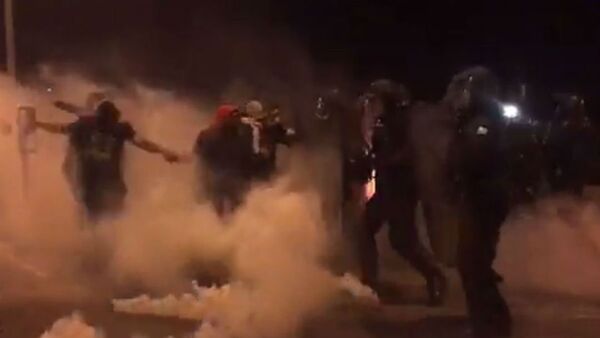 At least 350 guards at the Fluery-Merogis prison in France are protesting against what they allege are poor working conditions. The guards allege the prison is overcrowded and understaffed, which has allowed inmates to assault guards.

​The workers blocked the entry to the Fleury-Merogis Prison where disputes broke out between law enforcement and the prison guards. Citing strenuous working conditions, a spokesperson for the guards said the inmate occupancy rate is "close to 190 percent."

"When a guy alone has to manage a hundred inmates on a daily basis, you have to imagine what that means," a union leader said. The protests which took place late on Monday in France may be just the beginning: Another rally is slated for Tuesday morning.

The guards are also demanding the right to be able to search any prison cells without justification, something they are currently required to obtain prior to conducting any searches for weapons. "We do not care enough about the prison staff who are living in a growing insecurity," a labor union leader said, according to local media reports.

The demonstrators constructed barricades around the prison before setting them on fire, according to a Sputnik field correspondent. Protesters sealed off an entrance road to the facility where they enumerated their demands on placards, the correspondent added. Additional security forces were sent to the area to ensure order.

One accident in particular fueled the guards' fervor. On April 6, six guards sustained injuries from a fight that had erupted between guards and prisoners.