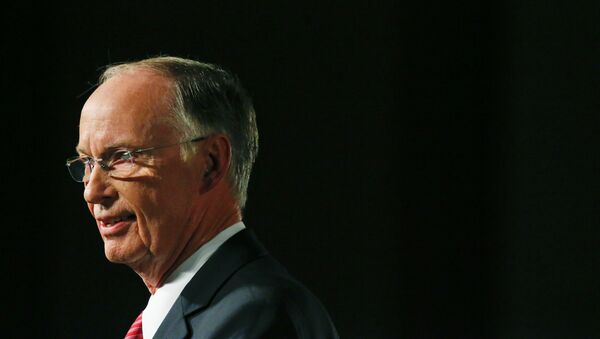 Bentley, 74, was booked into the Montgomery County Jail on Monday afternoon, charged with two misdemeanors. It would take a felony charge to remove him from office.

Fox News’ Bill O’Reilly Under Investigation in Sex Harassment Scandal
The governor is accused of using his position as governor to cover up his affair, which led to his divorce in 2015 after his wife of 50 years recorded phone conversations between her husband and Mason. His wife was also able to read his text message conversations with Mason, as his state-issued phone was linked to the state-issued iPad that he had gifted her.

There was also a text reading "I love you Rebekah,” which Bentley, a grandfather of six, had accidentally sent to his now-ex-wife Dianne.

The governor is accused of threatening staffers, greeting hotel staff in his underwear thinking that it was Mason, misusing state resources during his affair, and firing the state’s top law enforcement official Spencer Collier, who has alleged that he lost his job for his refusal to help cover up the affair.

“Governor Bentley directed law enforcement to advance his personal interests and, in a process characterized by increasing obsession and paranoia, subjected career law enforcement officers to tasks intended to protect his reputation,” the impeachment report states.

Felony Charges Dropped for Former Virginia Lawmaker Mired in Sex Scandal
On Friday, Bentley asserted that he did not plan to step down.

“I do not plan to resign. I have done nothing illegal,” Bentley told reporters. “If the people want to know if I misused state resources, the answer is simply no. I have not.”

Over the past year, a bipartisan group of lawmakers has called for the lovestruck governor to step down for violations of ethics laws and campaign finance violations. On Sunday, the Alabama Republican Party joined the call.

Last week, the Alabama Ethics Commission found probable cause that Bentley had broken state laws. Over the weekend, the state’s Supreme Court ruled that impeachment hearings could go ahead.