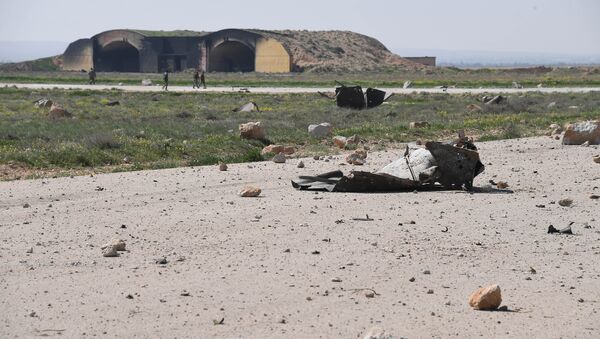 The US airstrike on the Syrian army on Thursday was a violation of international law, carried out without the backing of the UN Security Council or the US Congress, retired Lebanese Major General Hisham Jaber told Radio Sputnik.

"This strike was done for domestic reasons above all. Nobody can deny that Mr. Trump is facing domestic problems in America. He took advantage of those horrible videos and photos of civilians supposed to have been killed by chemical weapons to gain some support and he took that quick decision," Jaber said.

The attack is the first time the US military has openly targeted Syrian government forces.

Without Pantsir, Buk and Tor, S-400s Alone Not Enough to Cover Syria's Skies
While some US allies such as Israel and Saudi Arabia hope that Washington carries out more airstrikes against the Syrian government, Jaber thinks the US will limit itself to this attack.

"I think this strike was narrow, quick and limited. Some other countries, who are against the Syrian government, believe that this is the beginning of war, a large military intervention against Syria. I don't think so, I don't think the American air force will strike the Syrian army again."

"I don't think this strike will have a dramatic effect on the Syrian army. As President Assad said, 'our response to this strike is to continue to fight terrorism in Syria' and I think this statement was very respected by everyone."

Adam Wielomski, deputy editor of the Polish news portal Konserwatyzm.pl, told Sputnik Polska that the significance of Thursday's strike will depend on whether the US tries to follow it up with more attacks on the Syrian army.

"Everything depends on whether the US attack in Syria will be a one-off, a kind of US response to this confusion about the use of chemical weapons, or it is the beginning of a wider American-Syrian confrontation. Or it is a new round of the Cold War, which has been practically going on between East and West in recent years," Wielomski said.

US Missile Attack on the Syria's Sha'irat Airbase
© Sputnik
"Countries like Libya, Iraq and Afghanistan come to mind. But we don't know if this will be a single action or a re-orientation of President Trump's policy, a return to the politics that American neoconservatives have carried out in recent years."

"Looking at the various reshuffles in Donald Trump's circle, you can conclude there is a serious struggle between two directions which are strikingly different in their approaches to foreign policy in general and in their vision of international relations. What happened is the victory of one wing, let's conditionally call it the neocons, and their views on international relations."

"Again, I think we'll soon see whether this is a one-off event, or whether this policy will continue due to changes in the president's circle and there will be a return to the policies of Barack Obama and previous US presidents," Wielomski said.

Isnogud
9 April 2017, 22:06 GMT5
000000
"Trump Carried Out Strike on Syrian Army Airbase 'to Gain Domestic Support'" That is just part of the plan! This coward strike occurred when President Xi was in the US for a meeting with Trump. That was no "coincidence"! Trump has been advocating that China should help the US to stop NK's nuclear program. This strike was a kind of message to China: "either you do as we want, or next strikes will be on NK". I call this very low and very poor "diplomacy". But then again, the USA don't have Diplomacy, all they know is the use of force, brutality, bombing and destroying country after country, in order to try to achieve their global hegemony agenda!