Older, Not Wiser? Once Again, Children Taken from World's Oldest Mother of Twins 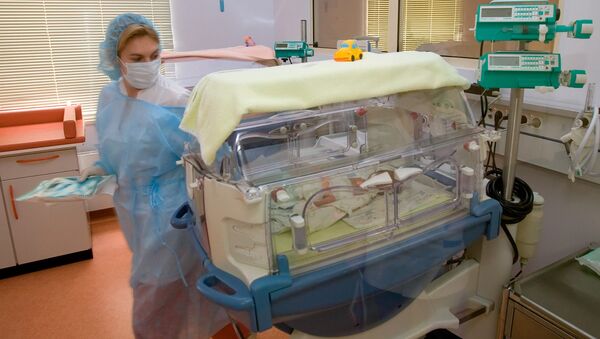 © Sputnik / Iliya Pitalev
/
Go to the photo bank
Subscribe
For the second time, children have been taken away from the woman who became in February one of the world's oldest moms.

The seven-week-old twins born to 64-year-old Mauricia Ibanez have been placed with a foster care family after authorities in Burgos, Spain, found them to be in a "vulnerable" situation, the Telegraph reports.

Ibanez had apparently been ordered by local social services to maintain a professional caretaker in her home and to make regular visits to a family support center, according to El Mundo.

The twins, a boy and a girl, are not the first children to be removed from Ibanez's care: the daughter she had when she was 58 was also taken from her when the girl was three because she was found to be neglected. The girl is now being raised by relatives in Canada.

Only a few weeks after giving birth to the twins, Ibanez was vowing to fight to bring her first daughter home.

"There was no rational justification for them to take my little girl away," she said about three weeks ago, the Daily Mail reports. "I want her back so she can get to know her brother and sister and I hope that can happen. I feel totally prepared to look after all three of them. They should be with their mum."

A friend, however, told El Mundo, "Better sooner than later. It was worse the way they did it last time, waiting until the girl was three years old and making it a terrible trauma both for the mother and the girl."
The decision to take the twins will be reviewed in six months.

Spanish law does not restrict fertility treatments by age (though Ibanez sought treatments in the United States). Other Spanish women to give birth at a very advanced age include Lina Alvarez, who had a baby girl at the age of 62 last year, and Maria del Carmen Bousada de Lara, who gave birth at 66 and died three years later, in 2009. Last year, a woman believed to be at least 70 years old gave birth in India.