Trump's 'Rambo-Style' Behavior May Result in a New 'Cuban Crisis' 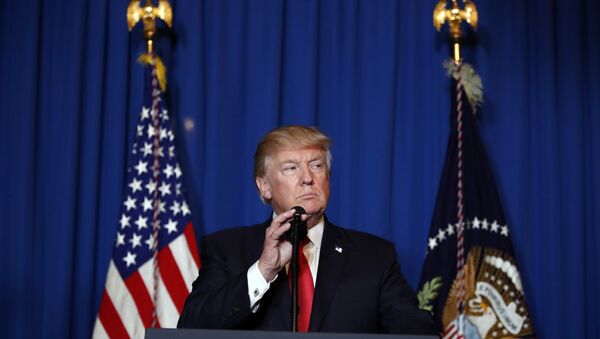 "The United States has been striving for world domination since 1990," Willy Wimmer, former Secretary of State of the German Defense Ministry and former chairman of the OSCE Parliamentary Assembly, told Sputnik Germany.

The expert stated that he is not surprised about Washington's military activities in Syria, as it is "the usual way" in which the US starts wars in other countries.

"This ‘Rambo-style' behavior of the US president, unfortunately, once again puts the world in front of an accomplished fact," Wimmer said.

According to him, it is now the right time for a meeting between President Putin and US President Trump. He also expressed hope for a balanced response from Russia and its contribution to the resolution of the ongoing crisis.

"The current dramatic situation offers an opportunity for the Russian and US heads of state to meet as soon as possible. People are afraid of a global war, a Third World War, and their worries are justified. Many observers point out that the current disastrous situation is very reminiscent of the Cuban crisis. This makes it clear where we stand. And we have to put an end to it! Now there is a good chance to appeal to reason," the expert stated.

Why US Should Be 'Brought to Trial' For Missile Attacks on Syrian Army
On Thursday night, the US military launched multiple cruise missiles at the Syrian military airfield in Ash Sha'irat, near the city of Homs. US President Donald Trump said the missile attack was a response to the alleged use of chemical weapons in Syria's Idlib Province on Tuesday.

Answering the question of whether US President Trump is likely to pursue a similar strategy in other conflicts worldwide, Wimmer said:

"We know that since the end of the Cold War, the US has chosen a new consistent strategy: they are striving for global domination. They even talk about it openly."

"One can only look with deep respect at Moscow that has such a sensible president, and not such an unpredictable head of state as Trump. We can assume that US actions can make many countries feel provoked. This is a fact," the expert stressed, adding that further escalation should be prevented as soon as possible.