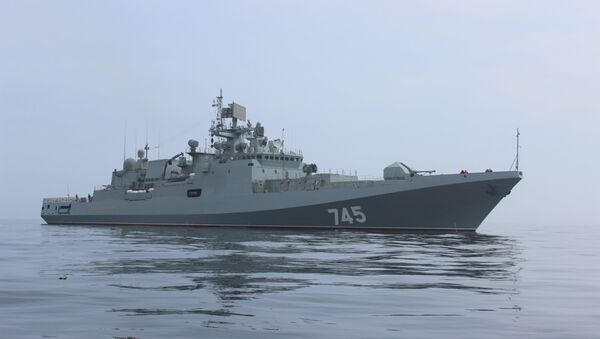 The ship rejoined a Russian naval force deployed in the region. Recently, the Admiral Grigorovich was involved in the Russian-Turkish PASSEX naval exercise in the Black Sea.

It is expected that the frigate will visit the Russian naval facility in the Syrian port of Tartus. The ship will operate in the region in accordance to the changing military situation.

In early-March, the Admiral Grigorovich replaced the Smetlivy frigate as part of the Russian naval task force in the Mediterranean.

The Admiral Grigorovich is the lead ship of project 11356. It was commissioned on March 14, 2014 and entered service with the Black Sea Fleet in June 2016.

The frigate participated in the operation of the Russian naval group in Syria led by the Admiral Kuznetsov aircraft-carrying missile cruiser.

Kalibr cruise missiles were launched from the warship on terrorist targets in November 2016. After Moscow had started the reduction of its combat group in Syria, the Admiral Kuznetsov naval group had been the first to sail back.

A group of Russian warships headed by the Admiral Kuznetsov aircraft carrier, accompanied by the Pyotr Veliky battle cruiser, the Severomorsk and Vice-Admiral Kulakov anti-submarine destroyers, the Admiral Grigorovich frigate and support vessels participated in the mission. Over two months of the operation, Russian naval aviation destroyed 1,252 terrorist targets in Syria.

000000
Popular comments
Trump is just a feeble 70 year old man, clearly experiencing the onset of dementia, who'd do whatever anyone said at this stage. Tell him aliens are invading and he'd launch at the moon. He's an easily led moron. Our fleet in the Med, ( including all the subs they're not mentioning), is more than enough to pest control Micky Mouse and the rest of the Disney gang. If it comes to all out nuclear war. Good, so what. Russia is big enough for many millions to survive. So will millions of Chinese, Latin Americans, Indians and many other decent human beings. The world would be completely rid of all yanks and their Euro slaves though. Good riddance even if I have to get incinerated with them.