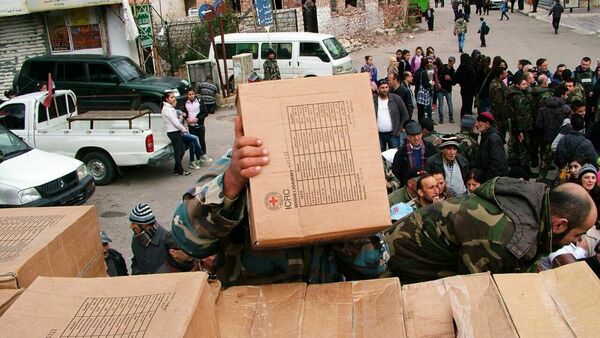 The Russian center for Syrian reconciliation has carried out seven humanitarian operations in Syria.

Russia Delivers Humanitarian Aid to More Than 3,000 Syrians in 24 Hours
HMEYMIM (Sputnik) – The Russian center for Syrian reconciliation has carried out seven humanitarian operations in Syria in the past 24 hours, delivering aid to almost 3,700 citizens, the center said in its daily bulletin.

"Within [the] last 24 hours, the Russian Centre for reconciliation of opposing sides has held 7 humanitarian events in the Aleppo (6) and Damascus (1) provinces," the bulletin, posted by the Russian Defense Ministry on Saturday, says.

According to the release, food aid was also delivered to Daraa province in the past 24 hours.

"Within [the] last 24 hours, 3,690 citizens have received humanitarian aid. [The] Total weight of humanitarian aid provided to the Syrian population has reached 4.4 [metric] tons," the reconciliation center informed.

In addition, Russia has helped with the distribution of UN aid by 2 humanitarian convoys sent to Daraa province.

The European Commissioner for Humanitarian Aid and Crisis Management Christos Stylianides announced on Wednesday that humanitarian aid was not a solution to the Syrian crisis and not an alternative to the political settlement process taking place under UN auspices in Geneva.

According to Stylianides, the Russia-Turkey-Iran backed Astana talks on upholding the Syrian ceasefire are also an important platform to prevent fighting and thus enable humanitarian access in Syria.