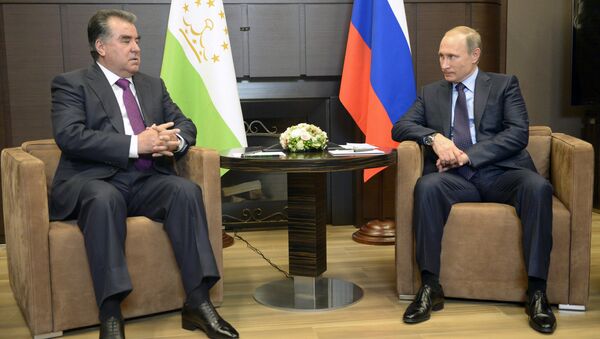 Strategic partnership and joint efforts in the fight against international terrorism are in the mutual interest of Moscow and Dushanbe, Russian President Vladimir Putin said in a letter to Tajikistan's President Emomali Rahmon on Saturday.

Russian House Speaker Thanks OSCE for Supporting Counterterrorism Conference
MOSCOW (Sputnik) — The letter was sent on the occasion of 25th anniversary of establishment of diplomatic ties between Russia and Tajikistan.

"I am convinced that we will further strengthen strategic partnership between Russia and Tajikistan, coordinate efforts in countering international terrorism, extremism, cross border crimes and other regional security challenges. This, undoubtedly, corresponds to our mutual interests and is developing in the framework of ensuring peace and stability in Central Asia," Putin's letter read according to Kremlin's website.

Tajikistan has a border with Afghanistan, a potential source of extremism and terrorism, since the country is engulfed in a crisis and the fight against Taliban movement and Daesh. In order to counter possible threat from Afghanistan a number of exercises have been held in the framework of CSTO, with the recent drills taking place in April 2016. In addition, Russia's largest foreign military base is located in Tajikistan to secure country from potential insurgencies.