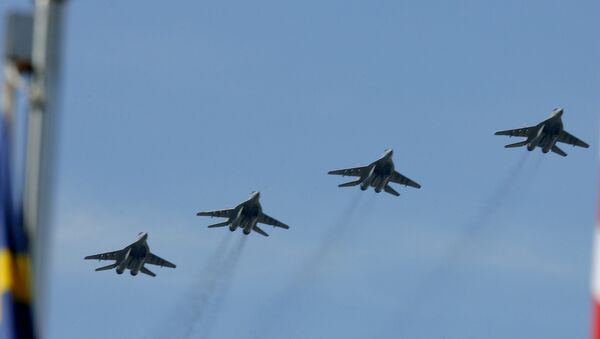 © AFP 2021 / TENGKU BAHAR
Subscribe
The Indian government has decided to send a team of the Indian Air Force to examine the MiG-29 fleet, which is being replaced by Malaysia, for its use. It will be a value purchase for the Indian Air Force which is short of hundreds of fighter jets since the cost of upgradation is expected to be minimal.

Why Buying MiG-29 Fighter Jets From Russia is Exactly What Serbia Needs
New Delhi (Sputnik) — The Malaysian government has planned to replace the MiG-29 fleet because it is 20 years old. Defense sources told Sputnik that an expert committee will be sent to Malaysia very soon for the purpose.

Earlier this month, the Indian and Malaysian Prime Ministers envisaged greater defense co-operation between the two countries including purchase of MiG-29. "There is a possibility too that India will buy our MiG 29 aircraft for refit. We reciprocate by accepting spare parts for our Sukhoi aircraft program," Prime Minister Najib Razak told the media the end of a six-day visit to India on April 5 as quoted by Bernama news agency.

Malaysia had bought 16 MiG-29s from Russia in 1995 but due to limited hours' training, lots of life is still left in six MiG-29s which are operational in the Royal Malaysian Air Force. India expects that with limited upgradation, the MiG-29s can be available for service for the next two decades. The cost of the upgradation is also expected to be low.

"Malaysia is a friendly country. India has for years supported training of Malaysian pilots by positioning MiG-29 instructors. India has also supported the maintenance of these aircraft and provided spares. India is quite conversant with the technical state of these aircraft. They may also come relatively cheap," said Air Marshal (Retd) Anil Chopra, the team leader of the MiG-21 upgrade project in Russia in the late 1990s.

The upgradation of the Indian Air Force's 67 MiG-29s is nearing completion with 90 percent of indigenous spare parts. "India has an ongoing program for MiG-29 upgrade. We will thus be able extend it to these Malaysian MiG-29 aircraft," Chopra said.

The Indian Air Force is facing a severe shortage of aircraft to fight a potential two-front war with Pakistan and China. Recently, India has signed deal to procure 36 Rafale aircraft from France but deliveries of the aircraft would only begin in September 2019 and is expected to be completed by April 2022. Further, 123 indigenous LCA Tejas will also be inducted by 2024 only.

The current strength of the Indian Air Force is 34 squadrons with 18-20 aircraft per squadron, far below the required strength of 42 squadrons suggested by the Indian parliamentary panel for defense for two front wars.