Western Values? Europe Welcomes Trump 'Only When He Violates the Law' 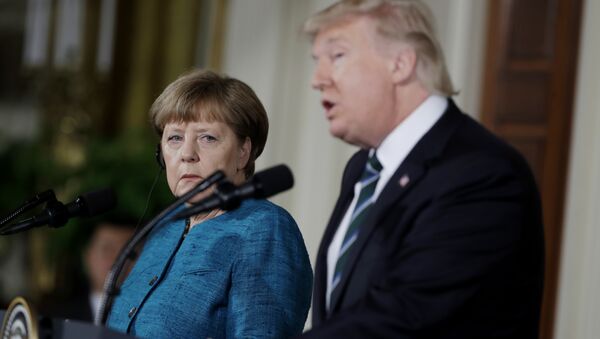 © AP Photo / Evan Vucci
Subscribe
The circumstances of the alleged chemical attack against the Khan Sheikhun settlement remain unknown, with many experts preferring not to hurry with a final verdict. However, it didn't prevent the US from launching missile attacks on Syria "in response."

Will US Missile Strike in Syria Nip in the Bud Potential Russo-American Détente?
Funnily enough, at that same moment when US President Donald Trump violated the "Western values," he received a standing ovation from Europe's top politicians. Trump whom European political elites mercilessly criticized for all his political strategies, won their consent and approval when he attacked Syria without waiting for the results of the investigation, journalist and researcher Tilo Gräser wrote for Sputnik Germany.

In particular, Trapp demanded an "independent and thorough investigation" and insisted that the Russian and Syrian sides should take part in it. Only this way, Trapp said, it would be possible to answer the two questions: "Was this an attack during which poisonous substances were used, and if so, what kind of poison was that? What evidence do we have, who is responsible for this, what actually happened and how?"

US Missile Strikes in Syria Violate 2001 Military Force Authorization - Senator
With his comments, Trapp made it clear that there is still no accurate information on the incident that took place on April 4. However, Western politicians immediately labelled it as a chemical attack carried out by the Syrian forces, an argument that was used by the US to justify its missile attack, Gräser noted.

On Thursday night, the US military launched multiple cruise missiles at the Syrian military airfield in Ash Sha'irat, near the city of Homs. US President Donald Trump said the missile attack was a response to the alleged use of chemical weapons in Syria's Idlib Province on Tuesday.

However, in his article for German Die Welt newspaper, Alfred Hackensberger drew attention to the fact the attack went against the interests of Damascus from a military point of view and therefore is unlikely to have been carried out by the Syrian government.

"It [Damascus] would only discredit himself at the international level and put itself at serious risk," Hackensberger wrote.

Although in November 2016, German Chancellor Angela Merkel repeatedly stated that she wants to cooperate with the US according to the principles based on the "respect of the rule of law," Chancellor Merkel's and other European politicians' attitude toward the US missile attacks clearly contradict their previous statements, Gräser stated.

On Friday, French President Francois Hollande and German Chancellor Angela Merkel discussed the US attack in a telephone conversation and issued a joint statement, blaming Syrian President Bashar Assad for the latest development. Merkel praised the attack as "indications are that the Assad regime was behind" the alleged chemical weapons use in Idlib, however, no proof was provided.