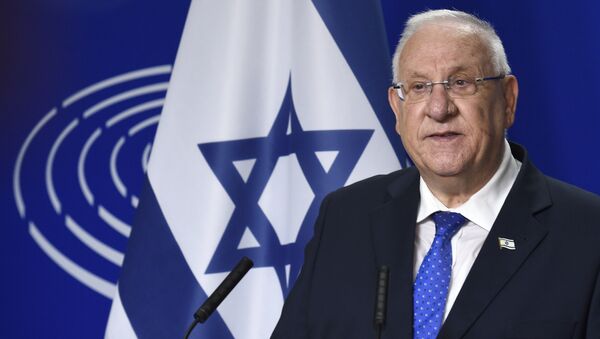 "The clear action by US and @POTUS are a fitting response to such unthinkable brutality, & an example to the entire free world," Rivlin said on Twitter.

The clear action by US and @POTUS are a fitting response to such unthinkable brutality, & an example to the entire free world.

​Earlier in the day, Prime Minister Benjamin Netanyahu said that Israel supported the US missile attack on the airfield.

On Thursday night, the United States launched over 50 Tomahawk cruise missiles at the Syrian military airfield in Ash Sha’irat, located about 40 kilometers (25 miles) from the city of Homs. US President Donald Trump said the attack was a response to the alleged chemical weapon use in Syria's Idlib on Tuesday, which Washington blames on the Syrian government.

US Missile Strike in Syria Resembles Yugoslavia Bombings - Russian Senator
On Tuesday, the Syrian National Coalition of Revolutionary and Opposition Forces reported that a chemical weapon attack in Syria’s Idlib province claimed the lives of some 80 people and inflicted harm on an additional 200 civilians. The coalition, as well as a number of Western states, blamed the Syrian government troops for the attack, while Damascus has refuted these allegations.

Following the 2013 chemical weapon attack in eastern Ghouta, Syria, an incident which killed up to 1,500 people, Syria joined the Convention on the Prohibition of Chemical Weapons. In January 2016, the OPCW announced its completion of the chemical weapons disarmament in Syria. However, in June 2016, the US State Department published a report which said Syria had continued to use chemical substances against citizens and suggested the country could also stockpile chemical weapons. After the report was released, UN High Representative for Disarmament Affairs Kim Won-soo said that UN and OPCW experts still could not confirm the complete destruction of chemical weapon production facilities in Syria.