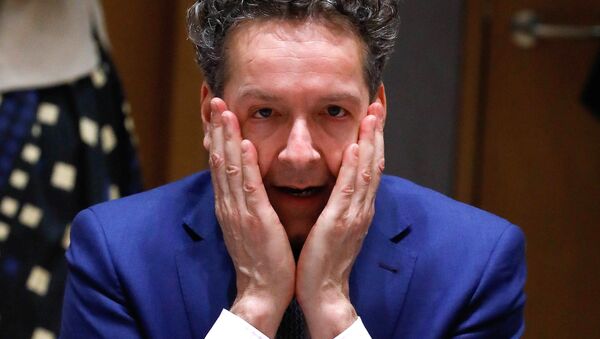 © REUTERS / Yves Herman
Subscribe
International
India
Africa
There are growing calls for the Eurozone president Jeroen Dijsselbloem - under fire for controversial "north-south divide" and "booze and women" comments - to be replaced, because he is only part time and represents the "north" group within the zone.

Dijsselbloem has been under fire ever since making controversial comments about southern EU member states which spend money on "booze and women" instead of cutting costs. MEPs demanded his resignation following the remarks to German newspaper Frankfurter Allgemeine Zeitung.

#Dijsselbloem quotes himself saying "#booze and women" quote "applies on the European level". Then he denies it's linked to Southern Europe. pic.twitter.com/8kJggwaOAy

​"During the crisis of the euro, the countries of the north have shown solidarity with the countries affected by the crisis. As a Social Democrat, I attribute exceptional importance to solidarity. [But] you also have obligations. You cannot spend all the money on drinks and women and then ask for help," he said.

The MEPs demanded that the parliament's President Antonio Tajani write to Dijsselbloem to protest at what they described as "offensive remarks" and for refusing to address parliament over the Greek bailout program.

The debate on @J_Dijsselbloem is an opportunity for a conflict of interest-free President for the #Eurogroup: https://t.co/bnMsbzh028 pic.twitter.com/WbNsc9H75y

​Campaign group Transparency International (TI) says there should be a complete overhaul of the governance of the Eurozone. TI says Dijsselbloem is the Dutch finance minister as well as being president of the Eurogroup which is a semi-permanent, party-time role.

"Unfortunately, Mr. Dijsselbloem immediately made ill-advised comments to the FAZ that reinforced the argument for why we need a full-time President of the Eurogroup (PEG): in the polarized world of Eurozone governance, a national finance minister will always be either of the ‘North' or of the 'South,' either an austerity hawk or a spendthrift," said Leo Hoffmann-Axthelm, TI's Research & Advocacy Coordinator — Eurozone Economic Governance, in a blog.

Dijsselbloem Not 'Fit to Be President' of Eurozone After 'Shameful' Remarks
"Even though they may be able to act diplomatically for a few years, deep down, they are still likely to resent each other. Once you accuse one negotiating side of blowing their money on 'drinks and women,' you can never be an impartial arbiter again."

Hoffmann-Axthelm says the way the Eurogroup works is dysfunctional. The president's position appears to have to fixed term and its activities are "opaque."

"As the Eurogroup has no rules of procedure — the treaty protocol attesting to its existence merely states that a President be elected for a 2.5-year term — the toxic tradition of a conflict of interest-laden national finance minister doubling as President could have resolved itself by virtue of the Eurogroup's inability to agree on anyone else. The current President's mandate runs until January 2018.

"The Eurogroup is notoriously opaque. Mr. Dijsselbloem's refusal this week to answer the Parliament's questions on the Greek bailout is unacceptable, even if currently legal," said Hoffmann-Axthelm.

In a letter to MEPs, April 4, Dijsselbloem said: "Regrettably, some people were offended by the way I expressed myself. Choice of words is of course personal as is the way they are picked up. I shall be even more careful in the future as it is never my intention to insult people."