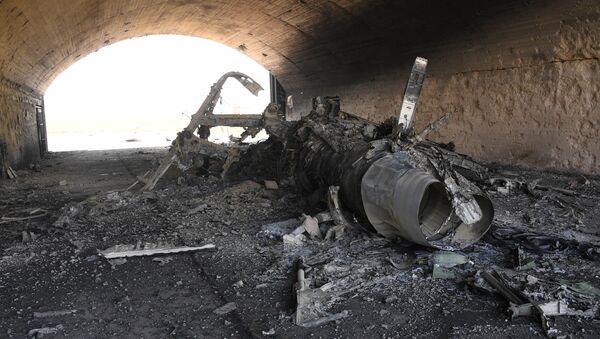 © Sputnik / Mikhail Voskresenskiy
/
Go to the mediabank
Subscribe
International
India
Africa
The extent of damage to the Syrian military base in Ash Sha'irat in the Homs province as a result of the US missile attack is less than it was estimated promptly right after the strike, a base employee told Sputnik on Friday.

US Strike on Syrian Homs Airbase Reflects Support of Terrorists – Ambassador
MOSCOW (Sputnik) — A Sputnik correspondent reported earlier in the day from the scene of the attack that some hardware had been salvaged, including five Syrian fighter jets. The runway also seemed to have been spared, he said, as well as a few hangars, but eight others were taken out of service

"Turns out everything is maybe not as bad as it seemed in the beginning, because at first there was fire and smoke, and we still are unable to get everywhere, because there can be unexploded projectiles," the employee said.

Homs Governor Talal Barazi said earlier on Friday that the airbase had suffered insignificant damage after the overnight attack with US cruise missiles.