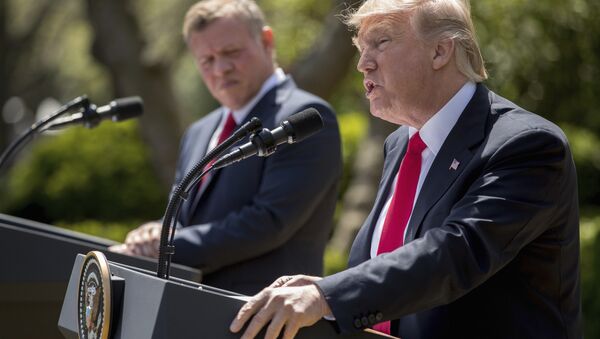 The two leaders held a bilateral meeting at the White House on crucial Middle East issues, such as methods of defeating the Daesh terrorist group. But the geopolitical implications of the meeting are significant, journalist and political analyst Dmitry Babich told Radio Sputnik's Brian Becker.

"If you look from a pure human point of view, there are terrible things going on in which Jordan indirectly participates," Babich said.

"Jordan not only supported the armed insurgency in neighboring Syria, Jordan is a part of that coalition which is now destroying Yemen, basically bombing that country. Jordan also provided direct support for the American-led coalition in its so-called war on ISIS [Daesh], which still looks more like a war on the Syrian government army."

Russia Submitted Draft Resolution on Probing Syria Chemical Attack
The White House on Tuesday blamed a deadly chemical weapons attack in Syria's Idlib on the government of President Bashar Assad and said the incident was "reprehensible and cannot be ignored by the civilized world."

Babich pointed out that the attack came the day after Secretary of State Rex Tillerson and US Ambassador to the UN Nikki Haley said the US had abandoned the policy of regime change in Syria.

"I think there needs to be a real investigation, but it is very suspicious that you have these kind of presumed chemical attacks from the Syrian government every time there is a possibility for peace settlement. The radical opposition just needs a pretext to launch another war against the Syrian government."

He added that while there may be a problem with democracy in Syria, it is no more serious than human rights issues that plague monarchies such as Jordan's.

"From a moral point of view, the Western positions on Jordan and on Syria are simply indefensible. There is no logic there," Babich claimed. "If there is any logic, that is the logic of ideological domination."

On Monday, Trump met with Egypt's President Abdel Fattah el-Sisi, and is set to meet with China's President Xi Jinping on Thursday.

000000
Popular comments
This attack occurred right after Tillerson and Haley made the announcement that the US had abandoned a policy of regime change in Syria. Assad is reaching out to the world, not looking for condemnation. It just simply doesn't add up for Assad to condone such an attack. Is is also odd that the US would be so quick to assume Assad is behind this without taking any time to investigate this attack. They are not interested in finding the truth, they are only interested in playing games. Propaganda intended to prep their citizens so they accept the next great military mission. More war it what Washington wants.
Darrell R
6 April 2017, 06:35 GMT2
000000
First of all the Usa is the master terror state in the World !!! The Usa, Gb, France and Nato started the regime change in Syria and Iraq, Ukraine and let in Yemen Saudi Arabia do the murdering !!! And now the Usa, Gb, France and Nato like to play that there are the Human country's !!!! sick very sick there are just killers !!!
tobi.gelando
6 April 2017, 09:40 GMT2
000000
Newsfeed
0
New firstOld first
loader
LIVE
Заголовок открываемого материала
Access to the chat has been blocked for violating the rules . You will be able to participate again through:∞. If you do not agree with the blocking, please use the feedback form
The discussion is closed. You can participate in the discussion within 24 hours after the publication of the article.
To participate in the discussion
log in or register
loader
Chats
Заголовок открываемого материала
Worldwide
InternationalEnglishEnglishMundoEspañolSpanish
Europe
DeutschlandDeutschGermanFranceFrançaisFrenchΕλλάδαΕλληνικάGreekItaliaItalianoItalianČeská republikaČeštinaCzechPolskaPolskiPolishСрбиjаСрпскиSerbianLatvijaLatviešuLatvianLietuvaLietuviųLithuanianMoldovaMoldoveneascăMoldavianБеларусьБеларускiBelarusian
Transcaucasia
ԱրմենիաՀայերենArmenianАҧсныАҧсышәалаAbkhazХуссар ИрыстонИронауОssetianსაქართველოქართულიGeorgianAzərbaycanАzərbaycancaAzerbaijani
Middle East
Sputnik عربيArabicArabicTürkiyeTürkçeTurkishSputnik ایرانPersianPersianSputnik افغانستانDariDari
Central Asia
ҚазақстанҚазақ тіліKazakhКыргызстанКыргызчаKyrgyzOʻzbekistonЎзбекчаUzbekТоҷикистонТоҷикӣTajik
East & Southeast Asia
Việt NamTiếng ViệtVietnamese日本日本語Japanese俄罗斯卫星通讯社中文（简体）Chinese (simplified)俄罗斯卫星通讯社中文（繁体）Chinese (traditional)
South America
BrasilPortuguêsPortuguese
NewsfeedBreaking
02:25 GMTNow Serbia: US Evacuates Intelligence Officer Affected by Havana Syndrome - Report
02:21 GMTGOP Rep. Fires Back at AIPAC's Attacks Over Not Supporting Israel's Iron Dome Funding Bill
01:18 GMTUnited Airlines to Layoff 593 Employees for Not Getting Vaccinated
01:05 GMTStudy Shows Massive Drop in Life Expectancy Due to Covid-19 Pandemic
01:01 GMTPhoto: Cuomo Enjoys Fishing Trip With His Dog After Resigning in Disgrace
00:56 GMTLava From Spain’s La Palma Island Volcano Reaches Ocean, Causing Possible Evaporation of Toxic Gases
00:19 GMT‘Making Ourselves Be Respected’: Macron Calls For European Army As US ‘Focused on Itself’
00:01 GMT‘Normal Life’ Won’t Return Without Pfizer’s Annual COVID-19 Vaccine Boosters, CEO Bourla Says
YesterdayUS House Republicans Seek Name of Official Who Approved Drone Strike on Afghan Aid Worker
YesterdayGeorgia Spa Shootings Suspect Pleads Not Guilty to Killings in Fulton County - Reports
YesterdayUS Air Force Chief ‘Hyper-Focused’ on Growing China Challenge in Pacific
YesterdayThere’s a New Sheriff in Town: FC Sheriff Upset Real Madrid in Champions League
YesterdayForgetful Joe Gets His Share of Fact-Checking
YesterdaySterling’s Drop Worries Investors Over State of Economy
YesterdayUS Court Deems Evidence Against Ex-Peruvian President Toledo 'Sufficient' for Extradition - Report
YesterdayACLU Chief Apologizes For Changing RBG’s Quote in Favor of ‘Woke’ Lexis - Report
YesterdayDPRK Claims Tuesday's Missile Test Was of a New Hypersonic Weapon Named Hwasong-8
YesterdayUS Republicans’ Support for Prosecution of January 6 Rioters Plunges 22% - Poll
YesterdayTrudeau Says Next Government Will Focus on Vaccine Mandates, Ending Pandemic
YesterdayEurozone Faces Supply Bottlenecks, Higher Inflation Amid 'Atypical' Recovery