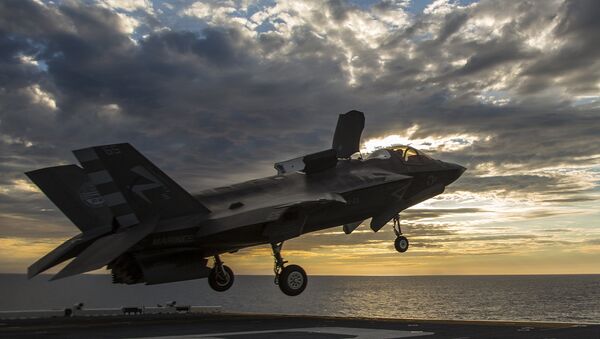 © Flickr / Lockheed Martin
Subscribe
UK authorities should review their plans to carry out major repairs of F-35 fighter jets in Turkey, particularly the repair of engines, and consider alternative options, in case of a potential diplomatic row with Ankara, lawmaker from the Scottish National Party (SNP) George Kerevan said Thursday.

Lockheed Gets $129Mln Contract to Address F-35 Jet’s Processor Problems
MOSCOW (Sputnik) — Kerevan called for an inquiry in light of Turkey's tense relations with NATO members, as well as a failed coup in 2016.

"The UK should have options in the event of a diplomatic crisis with Turkey. I want to know what alternative arrangements are in place if it became impossible to have the engines overhauled," Kerevan, who is to call on the UK Defense Select Committee to investigate the issue, told BBC.

The F-35 jet, formerly known as the Joint Strike Fighter, is being built by US defense giant Lockheed Martin in partnership with other countries, including the United Kingdom, Australia, Canada, Denmark, Italy, Norway, the Netherlands and Turkey.

The United Kingdom was chosen by the F-35 Program Office to be a global repair hub for the aircraft, providing maintenance, repair, overhaul and upgrade services for the aircraft and components in November 2016.

Boeing Pitches ‘Super’ Super Hornets to Replace F-35
The recent escalation in relations between Turkey and a number of European countries took place in February after German-Turkish journalist Deniz Yucel was arrested in Istanbul over alleged links to a terrorist organization and terrorist propaganda. The situation worsened in March after Germany, the Netherlands and Switzerland canceled several pre-referendum rallies held by Ankara, aimed at gaining support from Turkish expats for a constitutional increase of the president's powers. In response to the rally bans, Turkish President Recep Tayyip Erdogan compared German, and later Dutch, authorities to Nazis.

A military coup attempt took place in Turkey in July 2016. It was suppressed by government forces, with over 240 people killed and an estimated 2,000 wounded. Ankara has accused dissident Muslim cleric Fethullah Gulen, who has lived in the US state of Pennsylvania since 1999, and his followers, of playing a key role in the coup.