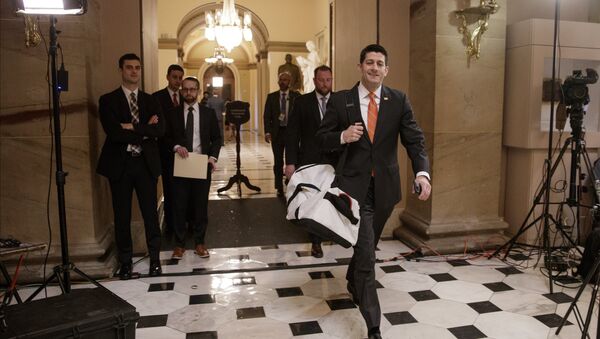 US House of Representatives Speaker Paul Ryan said in a statement on Thursday he supports te decision of House Intelligence Committee chairman Devin Nunes to step down from the investigation into Russia's alleged interference in the 2016 US election.

US House Intel Committee Chairman Nunes Temporarily Steps Down From Russia Probe
WASHINGTON (Sputnik) — Earlier in the day, Nunes announced his decision to step down temporarily from the committee's investigation into Russia's alleged role in the election and ties to US President Donald Trump.

"Chairman Nunes has offered to step aside as the lead Republican on this probe, and I fully support that decision," Ryan stated.

Oh March 28, the groups Democracy 21 and Citizens for Responsibility and Ethics in Washington asked the Office of Congressional Ethics for a preliminary inquiry into whether Nunes disclosed classified information in connection with the Russia investigation.