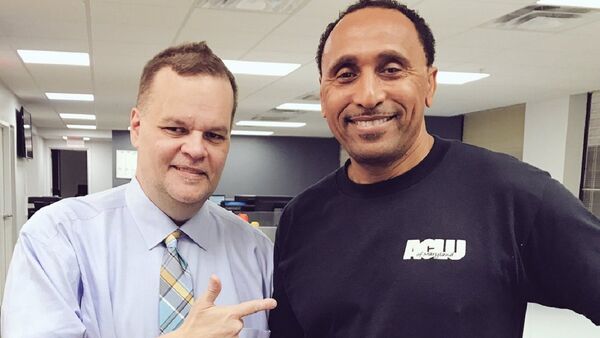 Cassandra Fairbanks
All materials
Following Wednesday’s announcement that Sputnik News has hired Lee Stranahan, former lead investigative reporter from Breitbart, the US liberal media went into a frenzy – but failed to note that the radio show will feature a progressive co-host as well.

The Crossfire-style debate show, Fault Lines with Nixon and Stranahan, will also feature Garland Nixon, a respected left-wing radio host and ACLU National Board member, with the idea that the duo will provide perspectives from both sides of the political divide.

Fault Lines: Lee Stranahan and Garland Nixon Join Sputnik Radio
“The show is informative, original and very entertaining – especially in this era where the establishment media is trying to tell Americans how to think. I invite everyone who is skeptical about Fault Lines with Nixon and Stranahan to listen for themselves and make up their own minds,” Stranahan told Sputnik News. “Garland is my polar opposite on most issues – he’s a progressive Democrat and I’m a Trump-supporting Republican – but he’s a great guy and experienced broadcaster.”

After the news broke on Sputnik, dozens of articles appeared online that alluded to Russia being connected to or pushing for US President Donald Trump. Of course, the liberal voice counterbalancing the show to provide the nuance and depth missing from many mainstream media conversations since the election, failed to catch anyone’s attention.

“Stranahan’s new position is the latest twist in the increasingly atomized world of niche right-wing media, which has seen an increase in prominence and influence during the Trump era. It also reflects a realignment on the right towards Russia as the administration, led by an unusually Russia-receptive president, becomes increasingly entangled in a drip-drip of stories about Russian influence,” Rosie Gray wrote for the Atlantic.

The breathless suggestions that the radio show is tied to some sinister plot did not stop there.

Stranahan has more than 25 years of experience in media and is a former leftist who previously wrote for the Huffington Post and Daily Kos. He was personally hired by Andrew Breitbart after his move to the right.

After seven years with Breitbart, Stranahan chose to part ways with the outlet, saying he was limited in his reporting by DC Bureau Chief Matt Boyle.

Likewise, Nixon has a long history in media, having worked in the industry for nearly two decades, including as a panelist on “Follow the Money” on Fox News and regular appearances on NPR.

During a periscope broadcast on Wednesday in reaction to the response to the new show, Stranahan asked where the headlines were about his co-host Nixon, a current ACLU National board member, joining Russian media, and blasted the coverage as hypocritical.

“The thing that is the most infuriating to the establishment media, Garland and I, despite our political differences, are both anti-establishment. I’m a Trump supporter and Garland is a Bernie Sanders supporter, which means neither of us colors inside the lines of traditional Democratic or Republican politics,” Stranahan told Sputnik.

“That’s what the press can’t handle.”

The two men have sharply contrasting beliefs, and are more than capable of adequately presenting their side’s perspectives in each broadcast.

The show, Fault Lines with Nixon and Stranahan, will be broadcast worldwide online, and will also be available in the Washington, DC, area on 103.5 FM HD2 station.

If providing sharp and well-articulated arguments for listeners to hear a range of perspectives is so scandalous, perhaps the rest of the US media should step out of the box themselves.