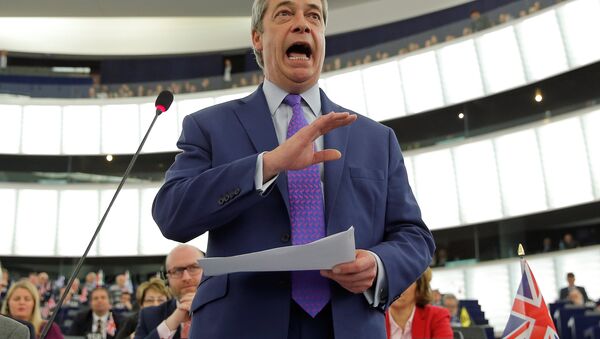 It's probably fair to say that there is no love lost between UKIP MEP Nigel Farage, a long time vocal critic of the EU, and many Eurocrats.

On Wednesday, April 5, Mr. Farage once again used his own position as an MEP himself, to criticize the European Parliament that he is a part of. The focus of his ire this time was the upcoming Brexit negotiations.

Mr. Farage accused EU officials of deliberately trying to punish the UK for leaving, citing the current rows over the EU wanting the UK to pay a US$64 billion "divorce" bill, and that Spain should have a final veto over the status of Gibraltar — a British Overseas Territory.

"Your aim and ambition is to destroy nation state democracy… You've shown yourself in these demands to be vindictive and nasty, and all I can say is thank goodness we're leaving." Mr Farage said.

But it was his next words that were to have the greatest impact.

"You're behaving like the mafia. You think we're a hostage we're not, we're free to go!"

The European Parliament erupted in boos and angry protestations.

Farage, conceded that the word "mafia" could offend "national sensitivities," and changed his phrasing to "gangster." Antonio Tajani did not look impressed by the effort.

Despite the fall out, Mr. Farage has refused to apologize, insisting in an appearance on LBC radio that he "couldn't give a damn about who I upset."

If I've helped the British people understand how ridiculous the EU are behaving, I couldn't give a damn who I upset. pic.twitter.com/iHd6pDkRXb

It's perhaps unsurprising, considering Mr. Farage has made something of a name for himself across Europe for high profile insults.

In 2010, he called the then EU Parliament President Herman Van Rompuy of having all "the charisma of a damp rag," before loudly asking, "Who are you? I've never heard of you!"

Then in October 2015, to the stony faces of French President Francois Hollande and German Chanceller Angela Merkel, Mr. Farage slammed both countries

"France is now severely diminished… and the French voice in this relationship and in Europe is little more now, frankly, than a pipsqueak," Mr. Farage said.

Speaking about growing popular resentment of the EU, Farage had this analysis of Merkel's Germany:

"It's an irony isn't it, that a project designed to contain German power has now given us a totally German dominated Europe."

Despite resigning from the leadership of the party he founded, UKIP, in July 2016, it seems that Mr. Farage continues to relish basking in the political limelight.