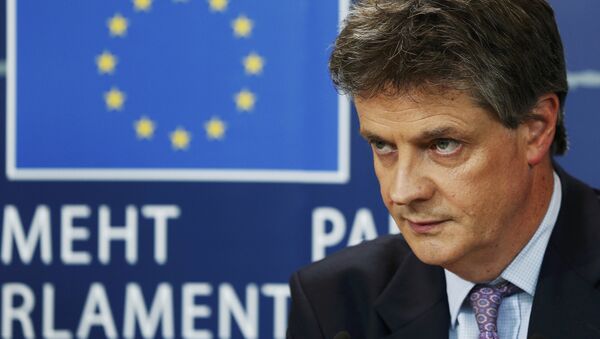 © REUTERS / Yves Herman
Subscribe
Campaigners have reacted with anger after the former UK Commissioner to the EU Jonathan Hill was appointed to a global law firm which is a major lobbyist in the corridors of Brussels just months after he stepped down from the Commission in the latest in the "revolving doors" scandal.

Lord Hill was the UK's Commissioner to the EU until he stood down, July 2016, following the Brexit referendum, which resulted in Britain leaving the EU. Prior to that he had been leader of the British House of Lords.

Hill has been appointed to global law firm senior advisor for Freshfields Bruckhaus Deringer LLP, which is listed in the Commission's register as a lobbying outfit. It's listing says the firm has a "track record in successfully supporting the world's leading national and multinational corporations, financial institutions and investors. We work on ground breaking and business critical mandates for established organisations."

​The news of his appointment was slipped out, March 29 — the day when all the news media were wholly occupied with UK Prime Minister Theresa May's letter to EU Council President Donald Tusk, which was delivered on that day, triggering Article 50 of the Treaty of Lisbon — the formal process of leaving the EU.

"The ethics committee did provide certain conditions for clearing the new role. Lord Hill is to refrain from providing advice to Freshfields financial service and non-financial-service clients on matters related his former portfolio. He must also observe a ban on engaging in lobbying activities with the Commission, though it remains unclear what is defined as such."

EU Ombudsman Opens Inquiry Into Barroso 'Revolving Doors' Scandal
The news come in the aftermath of the Barroso affair, in which former Commission President Jose Manuel Barroso was appointed non-executive chairman of Goldman Sachs International (GSI). He will also be an advisor to Goldman Sachs.

Of 27 former Commissioners, more than 50 percent are now working for organizations on the lobby register, including high-profile companies such as Uber, ArcellorMittal, Goldman Sachs, Volkswagen and Bank of America Merrill Lynch.