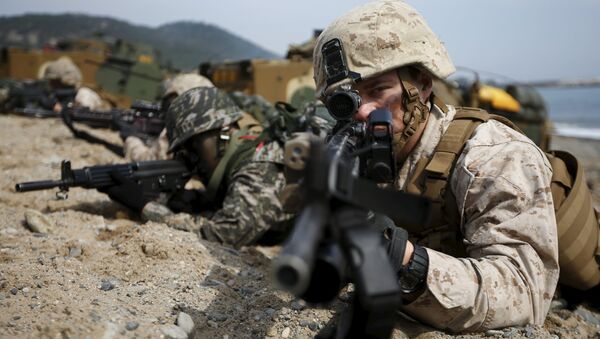 © REUTERS / Kim Hong-Ji/Files
Subscribe
Beijing does not want Seoul and Pyongyang to unite on South Korea's terms which would likely lead to greater American military presence close to China's borders, senior vice president for research and director of the Washington office at the National Bureau of Asian Research Roy Kamphausen told Radio Sputnik.

China "wants things to stay the way they are," he said.

In Kamphausen's view, Chinese leadership would like to see "gradual slow improvement, gradual opening, economic reform, even if at the most basic level. That's what they want to see happening in the North because sudden dramatic change very likely means that the unification would occur on South Korean terms. This is what China cannot live with – a unified Korean peninsula with the US potentially on their doorstep."

These comments came ahead of Chinese President Xi Jinping's official visit to the United States during which he will meet with President Donald Trump.

US General: Preemptive Strike May Be 'Only Option Left' With North Korea
North Korea is expected to be one of the key issues on the agenda since Pyongyang has stepped up its nuclear and missile activities in recent months. Since the beginning of 2016, North Korea carried out a number of missile launches and nuclear tests, much to worldwide condemnation. The reclusive state is reported to have conducted its latest ballistic missile test on Wednesday, firing what appeared to be a Scud-ER toward the Sea of Japan.

Pyongyang's recent activities prompted US Secretary of State Rex Tillerson to say that "all options are on the table," including the military means of resolving the issue. "The policy of strategic patience has ended," America's top diplomat said in March while on a visit to South Korea. "We are exploring a new range of diplomatic, security, economic measures."

This is something that China is strongly against. Beijing would not support a potential US military intervention in North Korea "by any stretch of the imagination," Kamphausen said. "The thing China fears the most is that the US will act unilaterally against North Korea."

Pyongyang May Have Been Testing New Technology in Latest Launch, Experts Say
To prevent this from happening, Beijing would try to convince Washington that there are other options.

When the Chinese side makes that sort of presentation, the Trump administration will pull back and say, 'Well what are you doing to calm down North Korea and prevent these types of future tests?' In the end I don't expect that there will be much movement on either party's side during the summit meeting," the analyst said.

000000
Popular comments
North Korea should invite the Chinese military in to their country. That will definitely put a stop to Americas invasion of North Korea. America is not a great learner of history. Remember the last time they where told "do not cross the Yalu"