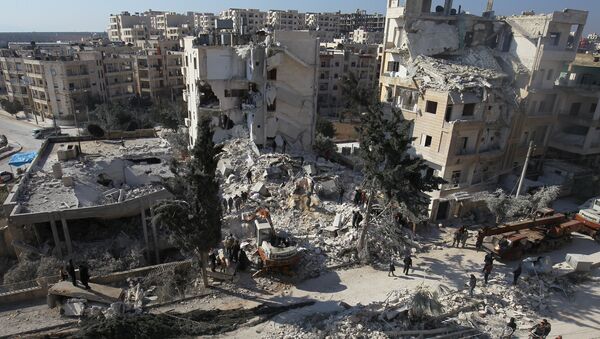 Turkey Will Be Unable to Further Advance in Syria Without 'Consensus With Assad'
MOSCOW (Sputnik) — Turkey's actions in the Syrian province of Idlib, the seizing of Syrian territory, and building of camps to train militants in the area, is a violation of Syria's sovereignty and UN Security Council resolutions, Syrian Ambassador to Russia Riyad Haddad told Sputnik.

"Turkey has also begun the process of seizing new lands by occupying the areas of Kyubat and Atme in the province of Idlib. In this area, Turkish troops have built two camps for the training of militants who have entered into two new terrorist groups. This is not only an outrageous aggression against the sovereignty of the country, but against the people of Syria," Haddad said.

He specified that in the city of Kessab, in the Latakia province, Turkish troops had entered several villages and cut down 300 pine and oak trees in an area of ​​15 square kilometers (over 5.5 square miles), destroyed hundreds of olive trees.

"Turkish troops also entered the Dikmadash area in the north of the city of Afrin and occupied higher ground near this city where heavy equipment and armored vehicles are already located. This district belongs to the Jisr al-Shughur district, which in turn is part of the Idlib province. Turkish forces have begun preparing for the construction of a wall that would separate the lands they had seized and our territory," Haddad said.

Chechnya Native Carrying Explosives Detained on Turkey-Syria Border
According to him, Turkey's statements about the end of the Euphrates Shield operation are in direct contradiction to what is happening on the ground.

"In practice, the Turkish side has not withdrawn its troops, which are currently in the north of the city of El-Bab, and are trying, with the help of factions that are allies of Turkey, to build a city there. I mean those terrorist groups which are located in the area and, thus, they violate the territorial sovereignty of the Syrian Arab Republic," the ambassador said.

"When we hear Turkey's claims that it is stopping its actions in Syria it is actually just one element of the information war. Furthermore, it is a blatant violation of the UN Charter, international law and all UN Security Council resolutions on Syria and on combating terrorism. In addition to all this, it is a violation of the values ​​and principles that have developed in international relations between neighboring states," he stressed.

"Turkey used the drying up of the Afrin River to the southwest of the town of Jenderis and moved the barbed wire that marks the border deeper into our territory, as if it were Turkish land already. Therefore, Syrian soil is being captured," Haddad said, adding that Damascus considers these actions a violation of Syrian sovereignty.

Turkey to Continue Efforts in Syria to Ensure National Security - General Staff
In August 2016, Ankara launched the Euphrates Shield operation, aiming to clear almost 2,000 square miles of Syrian territory near the Turkish border from militants of Daesh and other terrorist groups. The Turkish forces managed to take control of the Jarabulus and al Bab cities in northern Syria.

On March 30, the Turkish National Security Council announced successful completion of Operation Euphrates Shield, with Turkish Prime Minister Binali Yildirim stating that if Turkey is "threatened," a new operation could be launched.