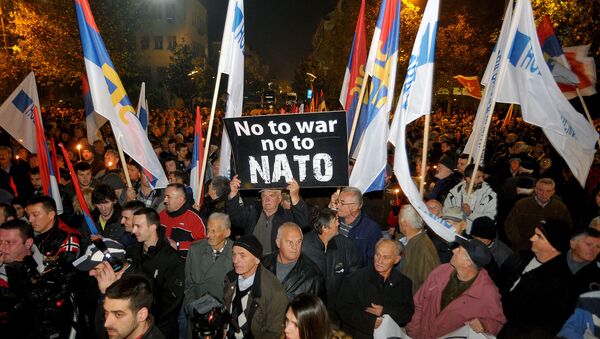 In late-March, the United States Senate approved Montenegro’s accession to NATO. The alliance and the rest of the member states will still have to sign off for Montenegro to formally join. According to Russian lawmaker Sergei Zheleznyak, the decision is purely poitical and does not make sense in terms of security.

In late-January, the government said Montenegro expected to become a full-fledged NATO member before the next summit of the alliance, which is scheduled for May.

In an interview with Sputnik Serbia, Sergei Zheleznyak, member of the Russian Parliamentary Committee on International Affairs, shared his thoughts on the move and its expected consequences for European security.

"The situation in the Balkans is crucial for European security. The policy conducted in the region by the West, first of all by the US, is very dangerous. Montenegro is being forcedly dragged into NATO, against the will of its people," Zheleznyak said.

Why Montenegro's Accession to NATO Doesn't Mean Russia's 'Defeat'
According to the lawmaker, Donald Trump’s administration "inherited the project" from the previous administration and has not yet articulated its position on the matter.

"I think that Montenegro’s accession to NATO will not enhance alliance’s capabilities. Instead, this will be a problem both for the country and the alliance," he argued.

Zheleznyak underscored that many in Montenegro are against NATO and still remember the 1999 tragedy related to "NATO’s aggression."

"The decisions currently being made by Podgorica are against the people’s will. Could such decisions be successful? Of course, not. We believe that such a matter should put to a nationwide vote. The reluctance to hold a referendum proves that the government understands that its actions are not justified," he said.

Despite the fact that a large percentage of the Montenegrin population, including those backing country’s accession to NATO, want a referendum, the authorities plan to decide on the membership through a parliamentary vote.

According to Zheleznyak, what is also important is the fact that the US Senate publicly said that the goal of Montenegro’s joining NATO is to deter the expansion of Russia’s influence.

Smoke and Mirrors: NATO Uses 'War on Terror' to Justify Presence in Balkans
"For NATO hawks, it is very important to deepen the standoff with Russia. Montenegro is a hostage of circumstances. Moreover, the situation in the country is very unstable. Dragging Montenegro into NATO by force may lead to a domestic collapse. The government is pushing the country to a standoff. Moreover, such factors as corruption and organized crime would only aggravate the situation," the Russian lawmaker pointed out.

Furthermore, Zheleznyak said that the accession of Montenegro to NATO is unlikely to help resolve the alliance’s security problems and not a threat to Russia.

"In terms of the NATO standoff against Russia, the move doesn’t make sense. If Montenegro joins NATO it will not resolve the problems of the alliance. The current structure of the alliance is incapable of countering the existing threats. NATO’s military and bureaucratic machine has repeatedly failed to prevent terrorist attacks and wars," the lawmaker said.

As for situation in Montenegro, according to Zheleznyak, accession to NATO will not be positive for the country’s security, due to a number of domestic problems, such as corruption and the lack of government transparency.

"In sum, the decision on Montenegro joining NATO is not military. It is a political decision. I don’t want Montenegro to become a NATO concentration camp, but the final decision should be made only by the Montenegrin people," the lawmaker concluded.