Love It or Hate It, Marmite is at 'Yeast' Great for the Brain 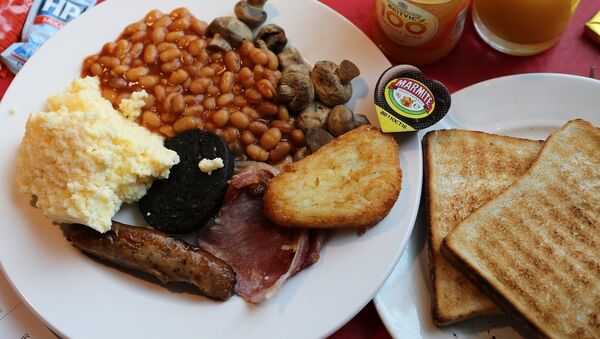 © Photo : Pixabay
Subscribe
Divisive it may be, but research by UK scientists suggests a daily spoonful of Marmite could boost brain power, and even prevent dementia due to the contentious spread's high concentration of Vitamin B12, which increases levels of chemicals, thought to protect against neurological disorders.

The University of York study tracked the brain activity of 28 young men and women using electroencephalography scans. Some subjects consumed a teaspoon of the spread every day for a month, while others swallowed a comparable amount of peanut butter. The former group exhibited a 30 percent decrease in their brains' response to visual patterns — the researchers state increased levels of gamma-amino butyric acid (GABA), an inhibitory neurotransmitter, in Marmite eaters.

GABA is known to inhibit the excitability of neurons in the brain, acting to "turn down the volume" of neural responses in order to regulate the balance of activity required to maintain a healthy brain. It is sometimes referred to as "nature's Valium," given drugs that increase its levels have been found to soothe anxiety, induce sleep, and calm nervous conditions.

The study found that Marmite contains 116 times more B12, the parent of red blood cells and protector of the nervous system — than peanut butter.

Dr. Daniel Baker, Lecturer in the Department of Psychology, University of York and the paper's senior author, said the research paved the way for further studies investigating how diet could be used as a potential route to understanding this neurotransmitter.

"You could say it calmed the brain, and we think this is because the B12 vitamin in Marmite fuels production of GABA. Deficiencies in it have been linked with a host of neurological disorders. Even dementia has been suggested. The results suggest dietary choices can affect the cortical processes of excitation and inhibition — consistent with increased levels of GABA — that are vital in maintaining a healthy brain," Dr. Baker said.

I'm excited to announce the launch of my newest pal, 'Meh-Mite'! A blander version of me that's impossible to love OR hate… pic.twitter.com/hxyftDSUSr

The effects of Marmite consumption took around eight weeks to wear off after the study stopped, suggesting to the researchers dietary changes could potentially have long-term effects on brain function.

The findings are said to be a "really promising" initial example of how dietary interventions can alter cortical processes, and will serve as a starting point for exploration of whether a more refined version of the technique could have some medical or therapeutic applications in the future.

"In our next study, we plan to give participants vitamin B12 supplements in pill form or a placebo and isolate whether this is the substance driving the effect," Dr. Baker added.

Now, the team hopes to study patients with neurological disorders, to see if eating Marmite can improve their condition. However, Dr. James Pickett, head of research at Alzheimer's Society, is skeptical of the full validity of the study's conclusions — as it only considered responses to visual stimuli, it cannot demonstrate the true impact of Marmite on dementia risk, he said in a statement.

Drinking to Remember: Your Coffee Habit May Protect Against Dementia
Nonetheless, he added that the study did offer a deeper understanding of how certain aspects of diet could affect the function of nerve cells in the brain.

If the team's hypothesis is correct, it will be welcome news for sufferers of dementia, and their family and friends.

Dementia — a loose term used to describe different degenerative disorders triggering gradual loss of brain function, such as thinking, remembering and reasoning — afflicts millions the world over, and is presently incurable. In Europe alone, it's estimated almost nine million people are afflicted. Alzheimer's is the most common form, accounting for around 62 percent of all diagnosed cases.

Dementia symptoms typically appear in individuals when they hit their mid-60s, and its causes are still not entirely understood — genetic, lifestyle and environmental factors all mighty play a role, scientists suggest.

Despite marmite's potentially rejuvenative properties, the brand has suffered from the UK's decision to leave the EU, as the drop in the value of sterling has compelled parent company Unilever to up their prices, leading some supermarkets to refuse to stock it at such inflated prices.

Marmite may have other, as yet unproven (and perhaps unprovable) qualities. Dr. Edward de Bono, often referred to as the "father of lateral thinking," was asked by the UK government in 2000 to suggest solutions to the Middle East problem — Marmite was his solution.

He explained the yeast-heavy spread is rich in zinc, a lack of zinc causes copper levels to rise in the blood, causing people to become aggressive. Most Middle Eastern bread is unleavened, and does not contain zinc as a result — de Bono reasoned if both sides ate more Marmite, they'd be less inclined to fight.

Of course, the introduction of the "love it or hate it" foodstuff to the Middle East could create a violent division of its own.