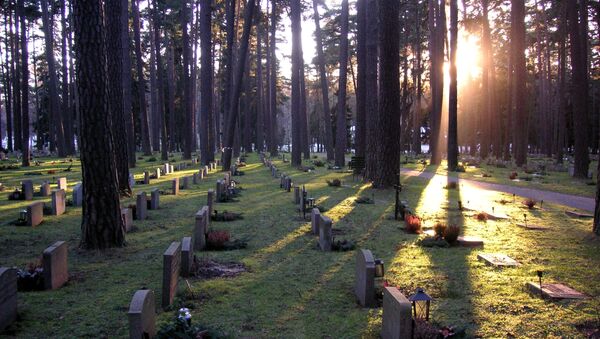 © Holger.Ellgaard
Subscribe
Exhausted Swedish undertakers have had enough and refuse to sink coffins into graves manually, which they claim are "too heavy" and "non-ergonomic." However, the use of any tools or machinery is prohibited, as it clearly violates the Swedish Church's ethical guidelines.

Matters of Grave Importance: Swedes Go for Gender-Neutral Funerals
At present, it takes four people at a time for a coffin to be lowered into a grave at Norsjö Church in Västerbotten County in northern Sweden. To complicate matters, all four must work synchronized and perform multiple tasks simultaneously, such as removing planks placed over graves. According to regional safety officer Anki Pettersson this hard work incurs occupational hazards and repetitive strain injuries, such as sore elbows and shoulders, Swedish national broadcaster SVT reported.

To avoid unnecessary injuries, Pettersson advocates a change to the Church of Sweden's approach. According to her, some kind of aid, such as a power shovel, would be nice. When she raised this issue with the employer, however, she was told that the Swedish Church's ethical rules did not allow the use of tools, tractors or excavators. According to the church, this would be an unworthy way of burying parishioners.

The Reverend Henry Väppling told SVT that, using machinery, coffins would dangle back and forth, which is unacceptable. According to him, the problem may be remedied by lowering the casket with ropes, an established method that should be continued.

Anki Pettersson was not satisfied and cited Sweden's work environment law, which aims is to reduce occupational injuries.

Resting in Peace: Sweden Gets First Religion-Neutral Cemetery
In 2008, a church attendant in Vännäs used a backhoe during a burial ceremony, which destroyed the coffin. He was later charged for grave desecration, but was acquitted by the district court. After the incident, Reverend Maria Lundgren stepped down, and the Church of Sweden started a nationwide training of all funeral personnel in ethics and safety.

Incidentally, the proportion of Swedes buried without a ceremony has doubled in the last three years to 5.7 percent in 2016, Swedish Radio reported. The Swedish Funeral Directors Association reported that more bodies are cremated directly at the morgue.

"I believe everyone has a right to a dignified farewell. But there are relatives who find direct cremation the easiest way, to avoid going to the funeral, to put it bluntly," undertaker Mats Rendahl told Swedish Radio.

000000
Popular comments
The coffin does NOT dangle when lower with a proper mechanical device. It goes straight down. I am sure it is much more dignified than 4 men struggling with a weight and gravity. This legalism is how priests destroy churches. It becomes an exercise of ego, not what is best.
jas
5 April 2017, 15:45 GMT
000000
Newsfeed
0
New firstOld first
loader
LIVE
Заголовок открываемого материала
Access to the chat has been blocked for violating the rules . You will be able to participate again through:∞. If you do not agree with the blocking, please use the feedback form
The discussion is closed. You can participate in the discussion within 24 hours after the publication of the article.
To participate in the discussion
log in or register
loader
Chats
Заголовок открываемого материала
Worldwide
InternationalEnglishEnglishMundoEspañolSpanish
Europe
DeutschlandDeutschGermanFranceFrançaisFrenchΕλλάδαΕλληνικάGreekItaliaItalianoItalianČeská republikaČeštinaCzechPolskaPolskiPolishСрбиjаСрпскиSerbianLatvijaLatviešuLatvianLietuvaLietuviųLithuanianMoldovaMoldoveneascăMoldavianБеларусьБеларускiBelarusian
Transcaucasia
ԱրմենիաՀայերենArmenianАҧсныАҧсышәалаAbkhazХуссар ИрыстонИронауОssetianსაქართველოქართულიGeorgianAzərbaycanАzərbaycancaAzerbaijani
Middle East
Sputnik عربيArabicArabicTürkiyeTürkçeTurkishSputnik ایرانPersianPersianSputnik افغانستانDariDari
Central Asia
ҚазақстанҚазақ тіліKazakhКыргызстанКыргызчаKyrgyzOʻzbekistonЎзбекчаUzbekТоҷикистонТоҷикӣTajik
East & Southeast Asia
Việt NamTiếng ViệtVietnamese日本日本語Japanese俄罗斯卫星通讯社中文（简体）Chinese (simplified)俄罗斯卫星通讯社中文（繁体）Chinese (traditional)
South America
BrasilPortuguêsPortuguese
NewsfeedBreaking
03:45 GMTMexican Soldiers Detained by Border Patrol Near Puente Libre - Authorities
03:35 GMTUN Secretary General Holds Talks With Foreign Ministers of Armenia, Azerbaijan
03:25 GMT'Country Has Gone to Hell': Trump Urges US Voters to Back 'America First' GOP Ahead of 2024 Election
03:18 GMTRussia Has ‘Thoughtful Optimism’ on Possibility of Restoring Iran Nuclear Deal - Lavrov
03:01 GMTMcConnell Refuses to Rule Out GOP Blockade of a Biden SCOTUS Nominee
00:38 GMTVideo: Amtrak Cross-Country Train Derails in Montana, Leaves Dozens Injured & At Least 3 Dead
00:00 GMTGerman Voters Going to Polls in Election That Marks End of Merkel's 16 Years as Chancellor
YesterdayVenezuelan Government Delegation Arrives in Mexico For Talks With Opposition - Maduro
YesterdayLavrov Says Borrell Told Russia to Get Out of Africa
YesterdayFour Teens Charged With Plotting School Attack on 25th Anniversary of Columbine Shooting
YesterdayMagnitude 5.0 Earthquake Rocks Taiwan - EMSC
YesterdayGermany Election: Merkel Warns Country's ‘Future’ at Stake Over Possible Left Swing
YesterdayAnthony Joshua Suffers Shock Loss to Oleksandr Usyk as Big Time Boxing Returns to UK After Pandemic
Yesterday'Things Happen': Trump Says 'Bad Call' From Doctor Would Possibly Prevent 2024 Election Run
YesterdayNorth Korea Ready for Talks With South on Ending 71-Year State of War
YesterdayTexas Democrat Not Ridin' With Biden on 'Trump'-Style Deportations to Haiti
YesterdayFrench Capital Sees 11th Weekend of Protests Against COVID-19 Passes
YesterdayLancet Task Force Probing COVID Origins Disbanded 'in Favour of Wider Biosafety Research'
YesterdayKamala Harris Hires Jen Psaki’s Brother-in-Law as Her Ratings Hit Bottom Amid Border Crisis
YesterdayShake a Leg! Unlucky Bank Robber in Spain Loses Prosthetic Limb During Fight With Customers