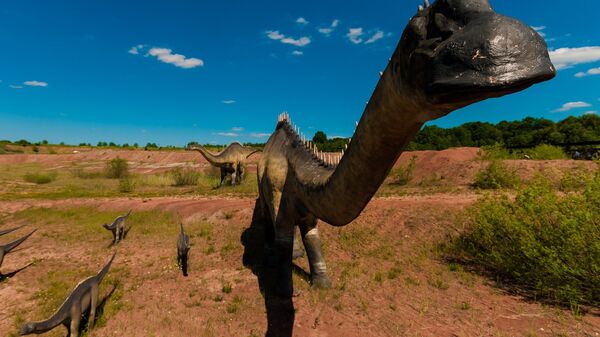 © Photo : Pixabay
Subscribe
The Triassic Period, an epoch stretching from 251 to 199 million years ago, was bookended by mass extinction events caused by abnormally high atmospheric carbon levels - and over the next century or two, carbon dioxide concentrations in the Earth's atmosphere could resurge to such degrees anew, research suggests.

Triassic Earth was significantly hotter than the modern world and almost exclusively comprised of deserts, lacking ice caps at its poles. Suffice to say, it would've been a highly inhospitable environment for human beings — to say nothing of the vast number of predatory Iguanadons roaming the landscape.

However, University of Southampton researchers suggest the Earth could be headed back to such climes in future if humans continue to consume fossil fuels at current rates, with atmospheric carbon dioxide (CO2) pollution reaching around 2,000 parts per million (ppm) by 2250.

Moreover, should human beings exhaust all conventional and non-conventional fossil fuel reserves, CO2 levels may rise to a calamitous 5,000 ppm by the 24th century — and human blunder could be exacerbated further if the Sun brightens over time, as part of its natural life cycle.

"Due to nuclear reactions in stars, over time they become brighter. Although carbon dioxide concentrations were high hundreds of millions of years ago, the net warming effect of CO2 and sunlight was less. Our new CO2 compilation appears on average to have gradually declined over time by about 3-4 ppm per million years. This may not sound like much, but it is actually just about enough to cancel out the warming effect caused by the sun brightening through time, so in the long-term it appears the net effect of both was pretty much constant on average," the paper said.

"Not only will the resultant climate change be faster than anything the Earth has seen for millions of years, the climate that will exist is likely to have no natural counterpart, as far as we can tell, in at least the last 420 million years."

The end result would be an amplified form of the end-University of Southampton extinction, catalyzed by noxious gases belched into the atmosphere by volcanic eruptions.

The same process of volcano-induced warming is also believed to have capped off the Permian Period, direct precedent of the Triassic, which resulted in "Great Dying," the single most shattering extinction event yet identified, which destroyed 95 percent of all life on Earth. Nothing living on the planet was spared — trees, plants, lizards, proto-mammals, insects, fish, mollusks, and microbes were all nearly wiped out, with roughly 9 in 10 marine species and 7 in 10 land species vanishing entirely.

The carbon dioxide belched by volcanoes during such extinction events is analogous to the carbon dioxide emitted by humans when burning fossil fuels, although the rate at which humans produce greenhouse gases, outpaces the volcanic eruptions that precipitated the Great Dying.

Should such a future come to pass, Earth itself will likely survive — it has evidently endured and weathered many events and eras that were inimical to mere mortal creatures. Human beings may go the way of Triassic dinosaurs if the highly specific planetary conditions they have evolved in harmony with change even a little.

The World Meteorological Organization has stated the Earth has reached the stage at which scientists can no longer fully understand its environmental conditions — humankind has, the Organization believes, now stepped into truly "uncharted territory" in respect of climate.

Furthermore, a United Nations expert on human rights and the environment has warned human activity is well on its way to causing a global extinction event that will harm humans and animals equally.