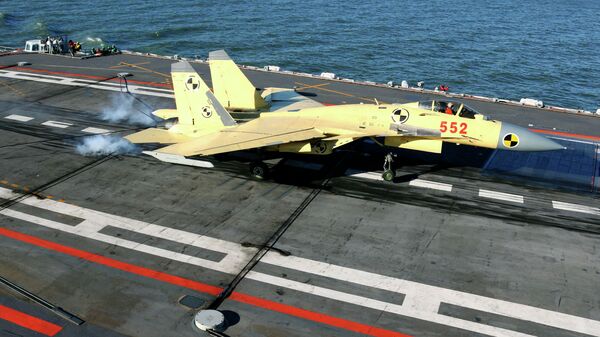 World
Beijing, Southeast Asian Neighbors Report ‘Progress’ on South China Sea Deal
According to Chinese news portal Sina, “At the moment, the aircraft carrier being prepared for launch is optimized in terms of load which compared to the Liaoning aircraft carrier can reach from 28 to 36 units of J-15 fighters.”

Currently, the Chinese Navy arsenal consists of the Liaoning aircraft carrier, created on the basis of the Soviet cruiser Varyag. Liaoning can base 24 J-15 fighters.

Earlier, Chinese media reported that the new aircraft carrier could be launched in late April 2017.

According to some experts, the likely date is April 23 which is the anniversary date of the founding of the PLA Navy.

The official representative of the Defense Ministry of the People's Republic of China, Wu Qian, said that the aircraft carrier, whose construction the country is conducting independently, is in its final stage.

However, he did not confirm the statements made by the Chinese media regarding the exact launch date of the aircraft carrier.

Liaoning is a Type 001 class vessel. The first carrier was rebuilt out of the Soviet aircraft cruiser Varyag in early 2000s, with the first sea trial taking place in 2011. In September 2012, Liaoning was commissioned into the PLA Navy.

In late December 2015, the Chinese Defense Ministry announced plans to construct a new Liaoning aircraft carrier built by China itself.