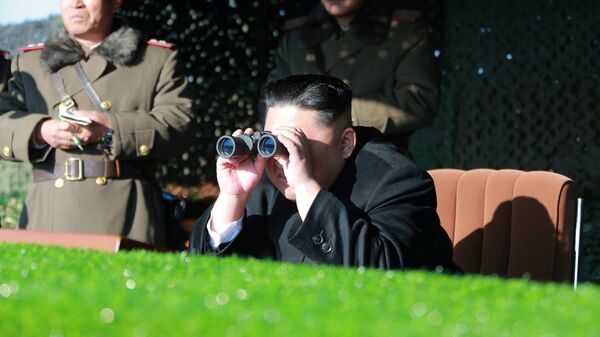 © REUTERS / KCNA
Subscribe
International
India
Africa
Ilya Tsukanov
All materialsWrite to the author
Ahead of his much-anticipated meeting with Chinese President Xi Jinping this week, President Trump vowed that if Beijing wasn't going to take care of the North Korean nuclear issue, he would. Veteran political commentator Pat Buchanan suggests Trump's words reflect that he still hasn't grasped the need for the US to avoid entangling alliances.

Speaking to the Financial Times in an interview published over the weekend, Trump confirmed that he intended to bring up North Korea and its nuclear and missile programs during his meeting with the Chinese leader later this week. China, he said, has "great influence" over Pyongyang, but the US would go it alone to "solve" the problem if Beijing doesn't step up to its responsibilities.

"China has great influence over North Korea. And China will either decide to help us with North Korea, or they won't. And if they do that will very good for China, and if they don't it won't be good for anyone," the president said.

Trump Hopes China Will Help US Eliminate North Korea Nuclear Threat
Trump also stressed that he wasn't going to tell reporters how he would tackle the North Korean issue. "I'm not going to tell you. You know, I am not the United States of the past where we tell you where we're going to hit in the Middle East."

Commenting on Trump's remarks in his column in The American Conservative, political commentator Pat Buchanan wrote that instead of dealing with the consequences of the North Korean nuclear and missile buildup, the US should ask itself why Pyongyang feels compelled to engage in this buildup in the first place.

"Why is North Korea building a rocket that can cross the Pacific and strike Seattle or Los Angeles?" Buchanan asked. "Is Kim Jong-un mad? No. He is targeting us because we have 28,500 troops on his border. If US air, naval, missile and ground forces were not in and around Korea, and if we were not treaty-bound to fight alongside South Korea, there would be no reason for Kim to build rockets to threaten a distant superpower that could reduce his hermit kingdom to ashes." 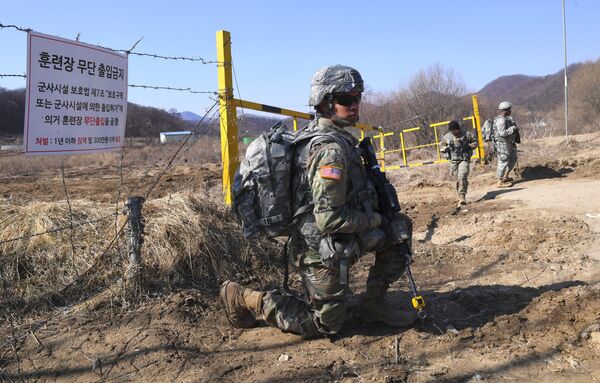 US soldiers take a position during their drill at a military training field in the border city of Paju on March 7, 2017. The US military has begun deploying the THAAD anti-ballistic missile defense system to South Korea, US Pacific Command said, with its first elements arriving on March 6, to protect against threats from North Korea
© AFP 2023 / JUNG Yeon-Je

This also brings up broader issues about US foreign policy as a whole, Buchanan noted. "While immensely beneficial to Seoul, is this U.S. guarantee to fight Korean War II, 64 years after the first, wise? Russia, China, and Japan retain the freedom to decide whether and how to react, should war break out. Why do we not? Would it not be better for us if we, too, retained full freedom of action to decide how to respond, should the North attack?"

World
Russia Deploys Warplanes to Eastern Military District in Response to US Drills
With its entangling alliances spanning the globe, the US, according to Buchanan, "is in rising danger of being dragged into half a dozen places, because we have committed ourselves to fight for scores of nations with little or no link to vital US interests."

Instead, the paleocon commentator noted, the US should look back to the advice of its Founding Fathers, including George Washington for guidance on the benefits and dangers of alliances. Washington had said that the US might "trust to temporary alliances" in times of emergency, but that "it is our true policy to steer clear of permanent alliances with any portion of the foreign world," Buchanan recalled. 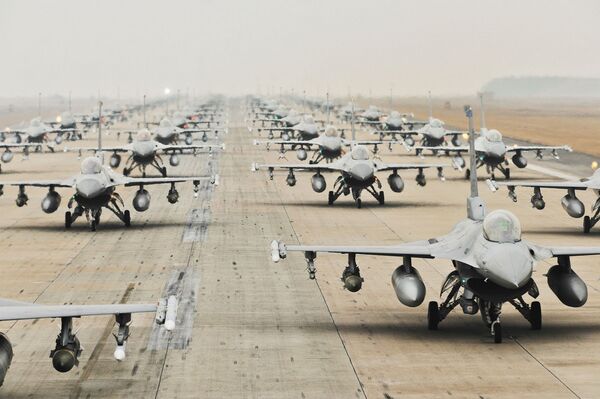 F-16 Fighting Falcons from the 35th and 80th Fighter Squadrons of the 8th Fighter Wing, Kunsan Air Base, Republic of Korea
© Flickr / DVIDSHUB

"Alliances, Washington believed, were transmission belts of war," he added. "Yet no nation in history has handed out so many war guarantees to so many 'allies' on so many continents, as has the United States."

Recalling Trump's election-era grievances about how the America's allies spend less than defense than Washington while running large trade surpluses with the US, the pundit emphasized that this won't change for so long as the US remains steadfastly committed to its imperial project. "President Trump may hector and threaten our allies that we will not forever put up with this. But we will, because America’s elites live for the great game of global empire," Buchanan wrote.

Ultimately, he said, a true "America First" foreign policy would mean restoring to the US "the freedom it enjoyed for the 150 years before NATO, to decide when, where, and whether we go to war." If the US does not do so, he warned, "the odds are high that one of [the US's war guarantees to another nation] will one day drag us into a great war, after which, if we survive, all these alliances will be dissolved in disillusionment."