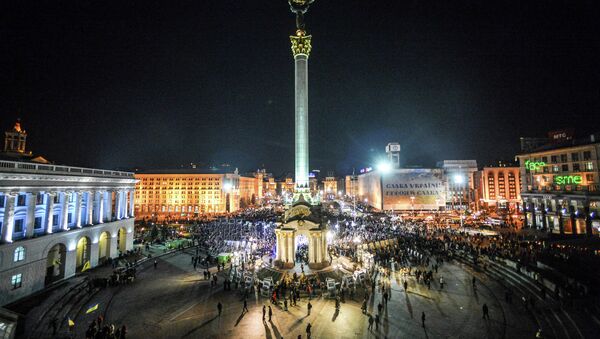 The deal will cost Polish budget $7.6 billion, and it is seen as a brainchild of the controversial Polish defense minister Antoni Macierewicz. He had been lobbying the project for years, saying quite openly that the Patriot missiles will be directed at Russian territory, minimizing the “threat” purportedly coming from there.

A Miniater With Useful Madness

Point of No Return: Greenland’s Glaciers Doomed to Melt by 2100
It should be noted that according to latest opinion polls, more than 50 percent of Poles would like to see a different defense minister, and there are good reasons for that. Macierewicz on many occasions accused the former Polish prime minister Donald Tusk (who is now the head of the European Council) of masterminding the crash of the presidential plane in April 2010, in which the then president of Poland Lech Kaczynski died.

Macierewicz claimed that Tusk and the future president of Poland, Bronislaw Komorowski, had a secret agreement with Russians, who deliberately made the normal landing of the presidential liner in the Russian city of Smolensk impossible or even exploded the plane in the air (the latter being one of the “versions” pushed by an investigative commission headed by Macierewicz). Both versions were dismissed by the experts of the Russo-Polish team which investigated the crash in 2010, as well as by the European policy bodies, which sided with Tusk in his conflict with the ruling party in Poland.

Adam Michnik, the editor-in-chief of the pro-EU Gazeta Wyborcza daily, the wealthiest news organization in the country, at a recent meeting with readers called Macierewicz “a mad guy who, however, knows where the jars with jam are located.”

And, one could add, these are hefty jars: $7.6 billion is a huge sum for Poland, a medium-sized European country of 38 million, ruled in shifts by the hardline nationalist PiS party (now in power) and the pro-EU Civic Platform (PO). Both parties have been dominating the political landscape for more than 10 years. Both parties are in a state of a permanent nasty conflict between each other, but in foreign policy both embrace radically anti-Russian positions.

One of the cornerstones of this “bipartisan Russophobia” has been PO’s and PiS’ active support for the 2014 Maidan coup in Ukraine and the anti-Russian regime which that coup spawned in Kiev.

Dangerous Precedent: Situation Tense in Kiev Amid Commemorations of Maidan Coup
However, the extremist nationalists, who came to power in Kiev as a result of the coup of 2014, cannot limit their racism to Russians alone, anti-Polish actions become more and more frequent in Ukraine too. The most scandalous incident happened in the night on March 29, when the Polish consulate in the city of Lutsk (north-west of Ukraine) was fired upon from a bazooka. No one was hurt, but the building was badly damaged.

The Polish consulates all over Ukraine were subsequently shut down and put their operations on hold until the supposedly “fraternal” Ukrainian state headed by the supposed fan of Poland, president Petro Poroshenko, guarantees the security of Polish diplomats.

The Ukrainian interior minister Arsen Avakov announced “normalization” of the security situation on Friday morning already, inviting Poles to get back to business as usual, but the Polish side preferred to keep its consulates shut for good.

Quite expectedly, both the Polish and Ukrainian politicians directed their anger and suspicions at Russia, saying that Moscow was behind the bazooka incident, even though no evidence of the so called “Russian connection” was produced. Hours after the incident, Russia was blamed for the shooting by the Ukrainian ambassador in Poland Andrei Deshitsa and by just about all the other Ukrainian officials commenting on the incident. Their Polish colleagues did not lag far behind, with PO’s bigwigs showing no lesser anti-Russian zeal than their colleagues in PiS. Jaroslaw Gowin, a former minister in PO’s government and for many years the number two person in PO, also supported the “Russian connection” theory. However, the only argument produced in support of this theory is the perception by both Ukrainian and Polish officials of Russia as a country willing to see a rift between Poland and Ukraine.

The former Polish prime minister Leszek Miller (formerly the leader of the social-democratic SLD party) was just about the only Polish politician to be ironic about the Russian connection paranoia: “In Lutsk, where the Polish consulate was fired upon, someone also ransacked the offices of a Russian bank. Obviously, that awful Kremlin is operating in doubles and triples,” Miller wrote in his Twitter account.

The Ugly Truth About Uktranationalists

Yuri Bondarenko, the head of the Moscow-based Center for Russo-Polish Dialogue and Accord, was equally ironic about the theory of “Russian connection,” accusing the Ukrainian ultra-right activists of shooting at the Polish consulate.

“I have an impression that Polish officials are unwilling to push the version about the “Russian provocation” any further, because they know the true value of the Ukrainian officials’ statements on this affair and some previous ones,” Bondarenko said in an interview to Sputnik. “When in March the offices of the Russian banks in Ukraine were blockaded for weeks by the Ukrainian ultranationalists from the National Corps group, with nasty inscriptions made on the banks’ walls and entrances blocked by improvised brick walls, Ukrainian officials also said it was all a Russian provocation,” Bondarenko commented.

Russia's Largest Bank Leaves Ukraine, 'Country With Zero Investment Reliability'
“Pro-government commentators in Kiev even “spotted” Russian government officials among the participants in this anti-bank pogrom. This is absurd, since the National Corps was originally formed by the veterans of the so called anti-terrorist operation against the rebel-held regions in Donbass, i.e. the people who have been proclaiming since the times before Maidan their desire to kill Putin and other Russian government officials.”

As a result of the blockade by ultranationalist activists, Russia’s Sberbank was forced to sell its assets in Ukraine to a consortium of Latvian and Belarusian investors.

Despite all the talk about the “Russian provocations” and vows to preserve “Ukrainian-Polish unity” against Russia, the truth about the deep conflict between the Ukrainian ultranationalists and Poland becomes impossible to deny – even in Warsaw. Grzegorz Schetyna, one of PO’s leaders and the former Polish foreign minister in Donald Tusk’s government, called the Ukrainian-Polish relations “the worst in the last 20 years,” according to the Polish news site Kresy.pl.

The situation is made worse by the fact that the Ukrainian ultranationalists have shown their ability to dictate their terms to the government and the parliament in Kiev, where they have powerful lobbyists and where the ultranationalist narrative has been dominant in the media since the times of the Polish-supported Maidan in 2014.

This conflict of two nationalisms periodically spills into the open during the Polish-Ukrainian arguments over the events of the World War II and its immediate aftermath. Poroshenko’s regime and ultranationalist groups in Ukraine lionize the pro-Hitler Ukrainian nationalist groups of the 1940s which slaughtered tens of thousands of Poles in Volyn and Galicia in 1943-1944, in an attempt to make Ukraine “ethnically clean.”

Still Do Not See Any Nazi? Ukrainian Nationalists Stage Massive March in Kiev
The leaders of the strongest of those pro-Nazi groups, Organization of Ukrainian Nationalists (OUN), before the World War II had led anti-Polish guerilla activity on the territory of Western Ukraine, when it was a part of the Polish state in 1918-1939. In Poland, OUN’s leaders of those times are viewed as “terrorists,” while the regime in Kiev views OUN and its leader, Stepan Bandera, as its ideological forefathers. Back in 2015, the Ukrainian parliament (Rada) passed the law penalizing any “denigration” of the memory of OUN and its wartime offshoot, the Ukrainian Insurgent Army (UPA), minutes after the former Polish president Bronislaw Komorowski addressed Rada with a friendly speech. The avenue in Kiev, which had been named after Moscow (Moskovski) was renamed after Bandera in 2016. In Poland, where Bandera (1909-1959) had been sentenced to death for terrorist activity back in 1939, the news about his lionization in Ukraine caused an uproar.

Suspicious Impunity and the Sad Truth

Polish public opinion was even more angered by acts of vandalism against the monuments to Polish victims of Ukrainian nationalists and German Nazis on the territory of Ukraine. Polish monuments and even graves of these victims were recently vandalized in Lvov (Western Ukraine) and in the village of Guta Peniatska in Lvov region. Before World War II, Lvov had a large Polish population and was seen as an important center of Polish culture, on the par with Warsaw and Krakow.

After all of these incidents of vandalism, the government in Kiev expressed its regrets and blamed “the third party” (a euphemism for Russia), but no culprits were ever found and no trials held. These facts are not stressed by the Polish authorities or the media, but they are not missed by the Polish readers and television viewers.

“Has anyone heard of the Ukrainian security service actually arresting one of these so called Russian provocateurs?” a reader nicknamed Poraniony wrote in his reaction to an article on a right-wing Polish news site Wpolityce.pl “This has been going on for two years now. In Ukraine, someone is attacking our consulates, someone is exploding monuments to murdered Poles, someone is destroying our memorial sites and cemeteries. Not only the perpetrators are not punished, they are not even named (with the exception of that universal scapegoat, Vladimir Putin).”

Ghost of Third Maidan: Why EU is Losing Faith in Poroshenko's Government
The unwillingness and inability of Poroshenko’s regime to distance itself from the actions of the ultra-right “activists” is an embarrassment not only to PiS, but to all of the Polish political elite. In the times of Maidan, which brought Poroshenko to power, the Civic Platform (PO) formed the Polish government, and both PO and PiS provided active support to the insurgency, with Polish officials visiting Kiev and making fiery speeches encouraging the protesters. At the time, the Polish authorities dismissed Russia’s concerns about the participation of Ukrainian ultranationalists in the protests, ascribing such concerns to “Russian imperialism” and “Putin’s fear” that a similar protest could sweep him from power in Russia. “Pro-EU Ukrainians cannot be ultranationalists” – such was the mantra of Polish officials, and they never tired of repeating it for years. Unfortunately, the reality is revealing itself to be much bleaker. The EU, and Poland as its member, supported the coming to power of a regime which allows some of the worst manifestations of the twentieth century bigotry: pogroms of foreign banks and businesses, devastations of monuments and cemeteries, armed attacks against embassies and “boycotts” of foreign artists. This the truth which both Poland and the EU as a whole will have to come to terms with – sooner or later. Poland’s drive to buy American weapons and build defenses against the invented Russian “threat” is just one of the ways not to look that truth in the eye.