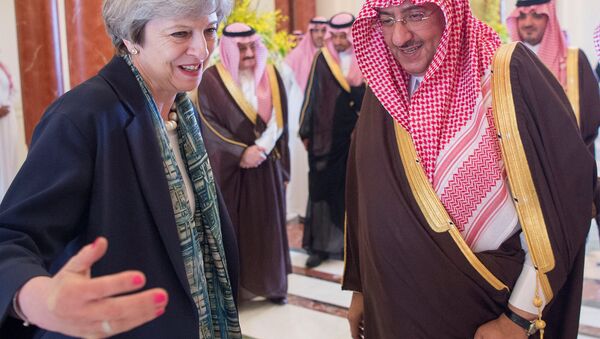 © REUTERS / Bandar Algaloud/Courtesy of Saudi Royal Court
Subscribe
UK Prime Minister Theresa May, on a visit to Saudi Arabia, April 4, as part of a regional trip focused on security, defense and trade, is coming under pressure after growing calls for action to be taken over Saudi Arabia's human rights record and use of UK arms in Yemen.

May is on a two-day visit to Saudi Arabia, where she will make clear that her hosts are a close and important ally and that the two countries will continue to work closely in a range of areas, particularly on counter-terrorism where UK-Saudi co-operation is vital.

On trade, the Prime Minister is expected to explore ways of boosting the already very strong UK-Saudi ties. Saudi Arabia is currently the UK's largest trading partner in the Middle East, with exports of British goods standing at US$5.81 billion.

PM: I want to see a truly global Britain that is really outward-looking with good trade deals around the world. https://t.co/7CGg2TsPNc pic.twitter.com/jNOVVXq1vW

"In Saudi Arabia, we must never forget that intelligence we have received in the past from that country has saved potentially hundreds of lives in the UK. And there is so much we can do together on trade, with immense potential for Saudi investment to provide a boost to the British economy," May said ahead of her visit.

British Gov't Report Confirms Saudi Use of UK-Made Cluster Bombs in Yemen
"So I hope my visit will herald a further intensification in relations between our countries and deepen true strategic partnerships, enabling us to seize the opportunities ahead and ensure the security and prosperity of our people for decades to come," she said.

However, she has come under pressure from politician to tackle Saudi Arabia on its human rights record and alleged infringements of international law in its military intervention in Yemen, in which it is accused of causing civilian deaths.

"In a country where women are still barred from driving and have to obtain permission from a male guardian to travel, marry or — in some cases — access healthcare the record, is pretty poor. The most important thing is that [Theresa May] cannot ignore the country's human rights record," Ann Clwyd MP, a Member of the Foreign Affairs select committee and chair of the All-Party Parliamentary Group (APPG) on Human Rights told the BBC.

"There have been lots of executions of juveniles recently. And the awful offensive in the Yemen. I think all human rights organizations — Amnesty International and the [UN refugee agency] UNHCR — have documented the Saudi monarchy's shocking human rights record and the Saudi-led bombing in Yemen — backed by the British Government — has left thousands dead, 21 million people in need of humanitarian assistance and three billion refugees uprooted from their homes.

"Unless the Prime Minister challenges the Saudi regime over its abuses, it would be very clear that she is sacrificing human rights," she said.

When asked by reporters if she would be raising the issue of human rights with the Saudis, May said the matter would be on the table as part of ongoing diplomacy.

"The important thing for the United Kingdom when we meet people and we want to raise issues of human rights — and that may be in a number of countries around the world — is if we have the relationship with them, then we are able to do that," May said.