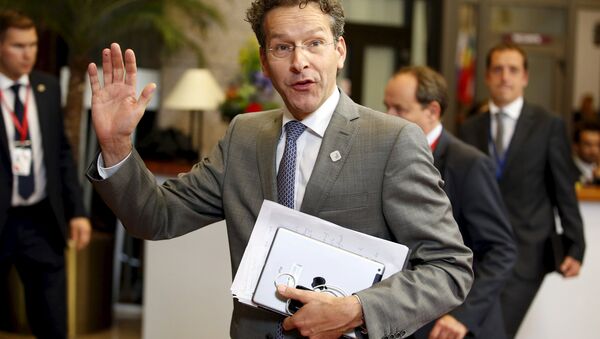 © AP Photo / Charles Platiau
Subscribe
International
India
Africa
Members of the European Parliament (MEPs) have demanded the resignation of the Eurozone chief Jeroen Dijsselbloem for divisive comments about southern EU member states which spend money on "booze and women" instead of cutting costs.

The MEPs have demanded that the parliament's President Antonio Tajani write to Dijsselbloem to protest at what they described as "offensive remarks" he made by telling a German newspaper that the southern — mainly Mediterranean — eurozone members, who are struggling to remain within the fiscal rules of the currency, were wasting money.

​MEPs were also critical of Dijsselbloem's repeated rejection of invitations to speak to Parliament, saying that "a Eurogroup President must be accountable to representatives of the people affected by Eurogroup measures," several MEPs called on Dijsselbloem to resign.

"Dijsselbloem 's views on countries that receive assistance are not compatible with his position. He should resign," tweeted Manfred Weber, leader of the European People's Party.

#Dijsselbloem shows complete disdain for European democracy by refusing to come to @EP_Belgium tomorrow. He should resign.

​"Dijsselbloem's words are shameful. How can someone who expresses such beliefs be fit to be the Eurogroup president? It is not the first time Jeroen Dijsselbloem expresses opinions, economic and political stances which are openly in contradiction with the line of the European progressive family," said Gianni Pittella, the leader of the Socialists and Democrats group within the European Parliament.

"Now with his shameful and shocking words in an interview to Frankfurter Allgemeine Zeitung, Dijsselbloem went far beyond by using discriminatory arguments against the countries of southern Europe," he said.

«Goodbye Mr #Dijsselbloem, no one will regret you!» My letter send to the #Eurogroup President to ask for his resignation. @Europarl_EN pic.twitter.com/ue9F7EUx9p

​However, in a letter to MEPs, April 4, Dijsselbloem said:

"Regrettably, some people were offended by the way I expressed myself. Choice of words is of course personal as is the way they are picked up. I shall be even more careful in the future as it is never my intention to insult people."

#Dijsselbloem to MEP's "I shall be even more careful in the future as it is never my intention to insult people" https://t.co/qk8Q9WDt3w