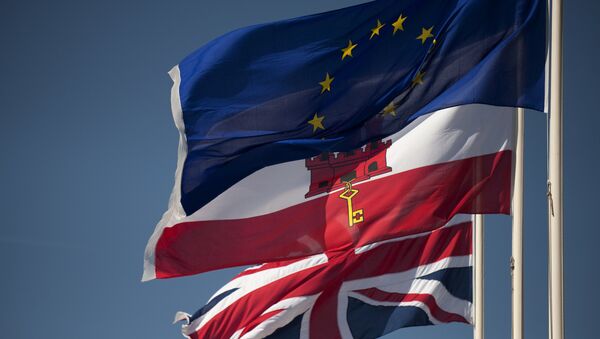 © AFP 2021 / JORGE GUERRERO
Subscribe
Spain’s Foreign Minister Alfonso Dastis stated that Spanish government had been "surprised by the tone of comments coming out of Britain" on the sovereignty of Gibraltar.

Gibraltar of Discord: EU May Back Spain in Dispute With UK Over Territory
MOSCOW (Sputnik) — Spain’s Foreign Minister Alfonso Dastis suggested on Monday that London had lost its composure after the UK foreign secretary vowed the sovereignty of Gibraltar would remain unchanged, UK media reported.

On Monday, UK Foreign Secretary Boris Johnson reiterated the nation’s commitment to maintaining the British sovereignty of Gibraltar, which voted overwhelmingly to stay part of the United Kingdom at a referendum in 2002.

"It seems someone is losing their cool," Dastis said at a conference in Madrid, as quoted by the BBC broadcaster. He added the government had been "surprised by the tone of comments coming out of Britain."

UK to Stay Committed to Supporting Gibraltar Post-Brexit - UK Foreign Secretary
The European Union’s negotiating guidelines for exit talks with the United Kingdom were revealed last week, suggesting London would have to seek Madrid’s approval of any deal with Brussels that would concern Gibraltar, the United Kingdom's overseas territory at the center of a new UK-Spanish row.

This angered Gibraltar Chief Minister Fabian Picardo who accused Spain of tricking the European Union into "mortgaging" the future EU-Gibraltar ties to its "obsession" with the UK territory.

Gibraltar was ceded to Britain in 1713 but Spain continues to lay claims to the territory on its southern tip, which is home to some 32,000 inhabitants.