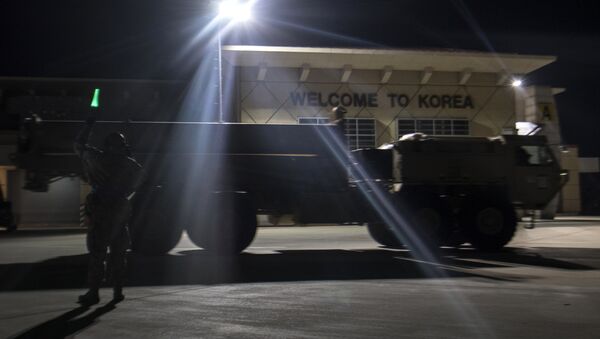 South Korea’s Democratic Party called on Monday for a parliamentary inspection of the deal to deploy a US Terminal High Altitude Area Defense (THAAD) missile defense system in the country amid claims that the government of former President Park Geun-hye could have pressured the local Lotte company to offer its land for the deployment.

S Korean MoD Denies Media Reports on Putting Off US THAAD Deployment
MOSCOW (Sputnik) – On March 24, the Washington Post newspaper published an interview with Lotte Chairman Shin Dong-bin, who said that the company was asked by the government to give up the land, having been left with little or no choice at all.

"Isn't Lotte under the same kind of pressure former President Park Geun-hye and Choi Soon-sil applied on large conglomerates to set up the Mir and K-sport foundations?" the party’s special committee said in a statement calling to review the land deal, as cited by the Yonhap news agency.

The party's concerns came amid the corruption scandal involving Park and her close associate Choi, who was allegedly meddling in state affairs despite not holding any official post, which erupted in October 2016, leading to Park’s impeachment in December. Choi is suspected of having used her connection with Park to pressure more than 70 local companies and business groups to donate some $70 billion to non-profit Mir and K-Sports foundations, with the money then having been funneled via paper company set up by Choi.

The agreement between the United States and South Korea on deploying the THAAD system on South Korean soil was reached in July 2016, with the first components of the system beginning to arrive in the country on March 8 in response to North Korea’s ballistic missile tests.