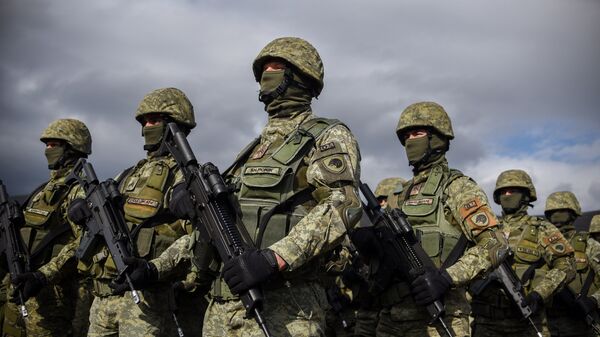 Serbia Hopes for EU, US, Russian Help in Countering Creation of Kosovo's Army
MOSCOW (Sputnik) — Moscow considers irresponsible the initiative to create Kosovo armed forces, as it goes against the already existing agreements, the Russian Foreign Ministry said on Monday.

"[We] paid attention to the words of US Ambassador in Pristina [Greg] Delawie regarding Washington's support of an initiative on creation of the armed forces of the self-proclaimed 'Republic of Kosovo,' provided that this would happen through adoption of amendments to the Kosovo 'constitution.' The idea of the transformation of Kosovo security forces into a full-fledged armed forces is nurtured by Prishtina authorities during the past years," ministry's spokeswoman Maria Zakharova said in a statement.

She pointed out that the Kosovar authorities were trying to create a "fake juridical" ground for this.

"The fact of the key importance is that this action is a violation of the international law, as it contradicts to the 1244 UN Security Council resolution, envisaging military forces presence in the region solely on the basis of the Security Council mandate, namely the Kosovo Force [KFOR], consisting mainly of units from NATO member states," Zakharova added.

According to Zakharova, "such a step would be extremely irresponsible from the point of view of security in the region and on the European continent as a whole."

"The emergence of a new force component in the form of 'Kosovo armed forces' in the Balkans would have contradicted the Florence agreement, which is aimed at maintaining regional stability with the assistance of the OSCE [Organization for Security and Co-operation in Europe]," she added.

Russia in Touch With Serbia Over Escalation With Kosovo - Foreign Ministry
The spokeswoman pointed out that in case of creation of Kosovo armed forces it would have turned out that at the territory of one of the countries-members of the Florence agreement — Serbia — an armed force not controlled by the government would have appeared.

The Florence Agreement or Article IV of the Dayton Peace Accords was concluded on June 14, 1996 and provided the framework for negotiations of a sub-regional arms control agreement. It engaged the three parties within Bosnia and Herzegovina as well as Croatia and Serbia and Montenegro.