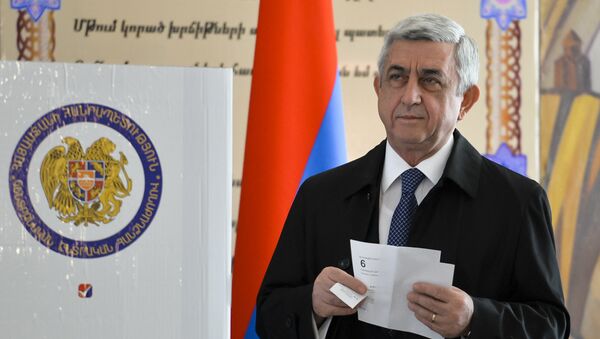 The Sunday's election was the first one held under the proportional vote. Apart from the national-level lists, regional lists were also presented in 13 constituencies.

A total of five political parties and four electoral blocs participated in the election trying to pass the threshold and to enter the parliament.

According to the preliminary figures of the CEC, the voter turnout was 60.93 percent and the new parliament would comprise of representatives from four political powers. Apart from the Republican Party, the Tsarukyan Alliance bloc with 27.32 percent, the "Elq" (Way Out) opposition alliance with 7.77 percent and the Armenian Revolutionary Federation Dashnakcutyun party would be represented in the next convocation of the parliament.

Armenia Parliamentary Elections Held in Accordance With Democratic Norms
The vote had been covered by some 1,300 reporters from both Armenia and abroad and monitored by over 28,000 observers, including 640 international ones.

Executive Secretary of the Commonwealth of Independent States (CIS) Sergei Lebedev told Sputnik that the vote was held in accordance with democratic norms and without violations.

"The April 2 elections to the National Assembly of the Republic of Armenia were held in accordance with the constitution, the electoral code and universally recognized democratic norms of holding elections," Lebedev said.

Armenian Ruling Party Winning Elections, Data From 64% of Polling Sites Counted
He added that the transparency of the election was higher than in several western votes.

According to the Organization for Security and Co-operation (OSCE), during the election main freedoms have been respected, however there were attempts to interfere in the counting process.

"As regards counting of the votes, we noticed an interference of the representatives of parties in the counting process," coordinator of the OSCE monitoring mission Ignacio Sanchez Amor told Sputnik.

Jan Petersen, the head of the election observation mission of the OSCE Office for Democratic Institutions and Human Rights (ODIHR), said that the situation with the vote secrecy had increased in Armenia.

At the same time, the ODIHR official expressed concerns over the alleged attempts to bribe voters and over the ballot stations' overcrowdedness.

Armenian Ruling Party Leads in Election as Data From 54 Polling Stations Counted
By the Sunday evening, he working group of the country's prosecutors' office had studied some 1,600 messages about the violations of the voting process and found that 254 of them had legal components of crime.

Local police had also registered 506 messages about alleged violations. According to Armenia's police, the majority of the messages included the reports about attempts of second vote or bribery during the voting process.