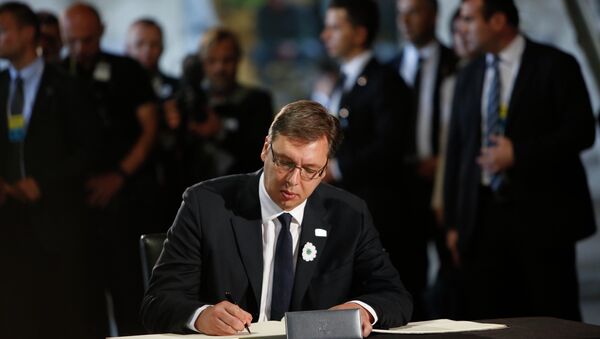 Serbian Prime Minister Aleksandar Vucic, who is favorite of the presidential election that took place on Sunday, outlined his views on the Belgrade's future policies and thanked Russian President Vladimir Putin and German Chancellor Angela Merkel for their support.

BELGRADE (Sputnik) — Serbia will continue its pro-European policy but is going to maintain friendly relations with Russia and China, Vucic said.

“I especially would like to express gratitude for Mrs. Merkel and Vladimir Vladimirovich Putin for their courage to hold negotiations with Serbia and with me as head of the government 15 and three days before the pre-election silence. Thank them for that, that indicates they have positive opinion about Serbia and not bad opinion about me,” Vucic said.

According to the Serbain Central Election Commission, Vucic is winning the presidential election with 59.79 percent of votes after processing of more than 10 percent of the ballots. The prime minister has already claimed victory in the election.

The second round of election is scheduled for April 16, provided that none of the hopefuls gets 50 percent of votes.