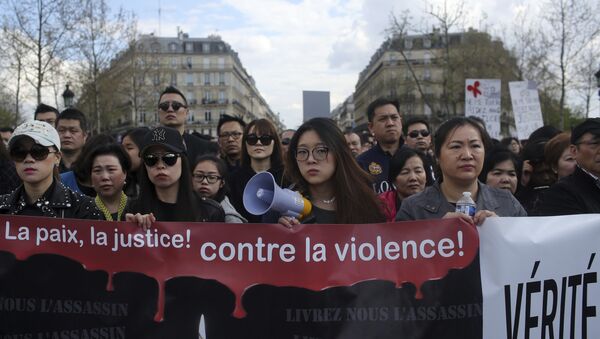 The protests triggered by last week's police killing of a Chinese man continue in Paris on Sunday, with about 6,000 people taking to the streets of the French capital to pay tribute to the murdered man and protest against police brutality, local media reported.

MOSCOW (Sputnik) — Earlier in the day, the demonstrators gathered at Place de la Republique, holding photos of murdered Liu Shaoyao, as well as banners reading "For peace, for justice! Against violence" and "I love France." The event started peacefully with a minute of silence at the foot of a statue in the center of the square, where Liu's photo and a banner reading "Police are murderers, we want justice."

According to Ouest France media outlet, the protest turned violent after the participants started throwing fruit, eggs and bottles into police officers, forcing them to use tear gas. The clashes reportedly lasted for an hour.

​​On March 26, a 56-year-old man of Chinese origin was killed in a standoff with the French police. Chinese media claimed citing the victim's relatives that the officers broke into the individual's house without two warnings and opened fire, while the man was able to injure one policeman with scissors. The police officers reportedly came to the place of the incident after a row between the victim and his neighbor about noise.

On March 28, Beijing filed a protest to the French authorities over the incident.

The accident triggered mass protests against police brutality in the French capital.