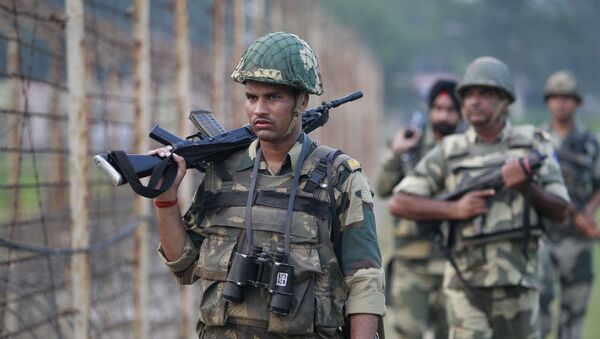 © AP Photo / Channi Anand
Subscribe
An unstable Pakistan-India border region and rumblings among former officials has given Islamabad reason to fear that New Delhi is reconsidering its long-held nuclear weapons doctrine of ‘no first use.'

Since obtaining nuclear weapons capability in 1967, India has traditionally subscribed to a purely defensive doctrine when it comes to the use of atom bombs.

However, Massachusetts Institute of Technology professor Vipin Narang asserted at the recent Carnegie International Nuclear Policy Conference in Washington DC that the long-standing defensive posture of New Delhi with regard to the use of nuclear weapons could be at an end and a new "pre-emptive" mentality put in its place, Business Insider reports.

Affirming these claims, General Ehsan ul Haq, a former chairman of Pakistan's Joint Chiefs of Staff Committee, has asserted that India is rethinking its nuclear posture, in what he suggests are only the latest in a series of increasingly provocative actions toward Pakistan.

These include former Defence Minister Manohar Parrikar questioning the point of the no-first-use policy in a speech in November 2016, New Delhi's dropping out of the Saarc Summit (an annual conference attended by member states Afghanistan, Bangladesh, Bhutan, India, Nepal, the Maldives, Pakistan and Sri Lanka), increased war hysteria at home, attempts to isolate Islamabad diplomatically and noticeably-heightened border tensions.

Haq has affirmed that India is "challenging the credibility of Pakistan's nuclear deterrence through doctrinal as well as technological developments," cited by the Times of India.

Naeem Salik, a former Strategic Plans Division official with the Pakistan government, asserted that India's suggestions about changing from a "passive [no-first-use] to pre-emptive disarming strikes" has created an air of fear among Pakistani strategists.

"We have not only got to study our side of the game, we also have to watch out what is happening on the other side so that we learn from there also and adapt and reform own processes as well," Salik said.

Adding to the disquiet in Islamabad, former Indian Foreign Secretary Shivshankar Menon said New Delhi's nuclear posture now has 'far greater flexibility,' according to Ibtimes.com. In Menon's memoir, he wrote, ''There is a potential gray area as to when India would use nuclear weapons first'' against a similarly armed enemy, presumably Pakistan.

"It's very scary because all the 'first-strike instability' stuff is real," Narang said.

000000
Popular comments
so, if India reconsiders, that seems to be one of the tools being used in the political arena with the two countries. Is this something to be concerned about or is this media manipulation?
michael
2 April 2017, 10:27 GMT1
000000
michael, I believe it is a media manipulation at first .... and then become for sure reality !!! The old Ngo and Cia system !!!
tobi.gelando
2 April 2017, 11:53 GMT1
000000
Newsfeed
0
New firstOld first
loader
LIVE
Заголовок открываемого материала
Access to the chat has been blocked for violating the rules . You will be able to participate again through:∞. If you do not agree with the blocking, please use the feedback form
The discussion is closed. You can participate in the discussion within 24 hours after the publication of the article.
To participate in the discussion
log in or register
loader
Chats
Заголовок открываемого материала
Worldwide
InternationalEnglishEnglishMundoEspañolSpanish
Europe
DeutschlandDeutschGermanFranceFrançaisFrenchΕλλάδαΕλληνικάGreekItaliaItalianoItalianČeská republikaČeštinaCzechPolskaPolskiPolishСрбиjаСрпскиSerbianLatvijaLatviešuLatvianLietuvaLietuviųLithuanianMoldovaMoldoveneascăMoldavianБеларусьБеларускiBelarusian
Transcaucasia
ԱրմենիաՀայերենArmenianАҧсныАҧсышәалаAbkhazХуссар ИрыстонИронауОssetianსაქართველოქართულიGeorgianAzərbaycanАzərbaycancaAzerbaijani
Middle East
Sputnik عربيArabicArabicTürkiyeTürkçeTurkishSputnik ایرانPersianPersianSputnik افغانستانDariDari
Central Asia
ҚазақстанҚазақ тіліKazakhКыргызстанКыргызчаKyrgyzOʻzbekistonЎзбекчаUzbekТоҷикистонТоҷикӣTajik
East & Southeast Asia
Việt NamTiếng ViệtVietnamese日本日本語Japanese中国中文Chinese
South America
BrasilPortuguêsPortuguese
NewsfeedBreaking
20:46 GMTFacebook, Instagram Delete Video of Brazilian President Linking COVID-19 Vaccines to AIDS
20:41 GMTEuropean Regulator Approves Booster Dose of Moderna Vaccine
20:39 GMTUS Very Supportive of EU's Engagement in Iran Nuclear Deal - State Dept.
20:31 GMTUpdated US Hate Crime Data for 2020 Shows Highest Incident Levels Since 2001 - FBI
20:23 GMTChinese FM Wang Yi to Meet Afghan Taliban Leaders in Qatar for First High-Level Talks
20:03 GMTJFK's Nephews Slam Biden Administration After Postponing Assasinaton Records
19:57 GMTUS Has No Issue With Russia-China Military Drills in Indo-Pacific Region - Pentagon
19:55 GMTTory MP Says Gender Self-Identification is a Threat to Women’s Rights
19:53 GMTYellen Appoints Counselor to Promote Racial Equity - US Treasury Dept.
19:44 GMTAfter Cricket Player Shami Gets Trolled, Indian Parliamentarian Says It Is 'Hatred Against Muslims'
19:42 GMTLavrov on Russia-NATO Relations: Cannot Catastrophic Because They Do Not Exist
19:09 GMTFlorida Gov. DeSantis Offering $5,000 to Unvaccinated Police to Relocate to Florida
19:04 GMTLaw to Protect Religious Structures on Government Property Now In Effect in India’s Karnataka
19:02 GMTKashmir to Witness First Ever Steel Plant as Modi Govt Pushes for Development in Violence Hit Valley
19:01 GMTIndian Start-up Unveils Fastest, Lightest Hypercar Ekonk with Top Speed of 309 Kmph
18:42 GMTFacebook Whistleblower Tells UK MPs Platform 'Unquestionably Making Hate Worse'
18:41 GMTIndian Farmers to Protest Nationwide Demanding Removal of Federal Minister Over Lakhimpur Violence
18:35 GMTAlec Baldwin’s Wife Says Impossible to Express Shock, Heartache After Shooting Incident
18:15 GMTFacebook Knew For Years Its Products Featured Human Trafficking Content, Internal Doc Reveals
18:15 GMTEgypt's El-Sisi Ends State of Emergency for First Time in Four Years