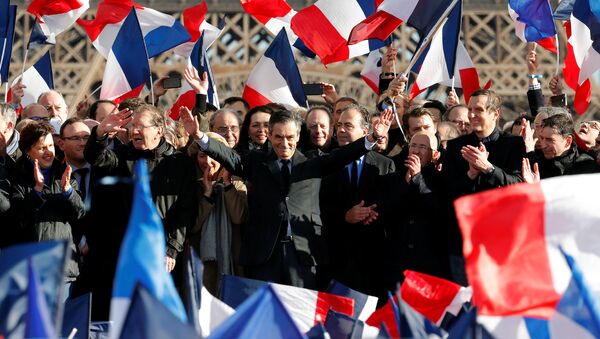 "I think that the campaign of the supporters of Francois Fillon is hysteric," Bayrou said in an interview with Grand jury RTL-Le Figaro-LCI.

Bayrou stressed that Fillon had "a vocation to be the spokesman of the right," adding that it was "anti-national."

According to polls, Fillon's chances in the presidential race have wavered after the scandal that broke out January when allegations of his wife being fraudulently employed as his parliamentary assistant came to light.

The first round of the French presidential election is slated for April 23, while the run-off is expected to take place on May 7. According to recent polls, Macron and National Front party leader Marine Le Pen have equal chances to win the first round, with voting intentions figures for both of them varying from 24 to 26 percent during the last week. Fillon is projected to receive 20 percent of votes. In the run-off, Le Pen is set to lose both to Macron and Fillon.