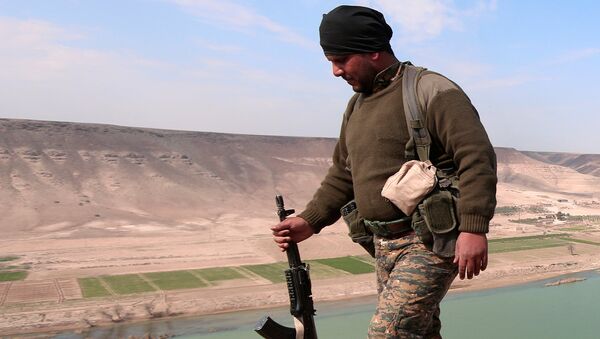 © REUTERS / Rodi Said
Subscribe
The United States' prolonged operation to free Syria's Raqqa from the Daesh will be in vain unless it cooperates with both the Syrian army and Syrian President Bashar Assad, the spokesman of the Damascus platform of Syrian opposition told Sputnik, commenting on a recent statement of the US ambassador to the United Nations.

US, Turkey Talk Middle East Moves as Battle for Raqqa Heats Up
MOSCOW (Sputnik) – On Thursday, US Ambassador Nikki Haley stated that the United States "cannot necessarily focus on Assad the way the previous administration did," adding that Washington’s priority was now to get things done in Syria.

"I think that America finally realized that it would be unable to defeat IS without Assad. The Americans and Kurdish fighters will not succeed in Raqqa and Al Tabqah unless they cooperate with the Syrian army and with Assad himself. Their forces alone will be unable to do it," Tarek Ahmad, a member of the Syrian Social Nationalist Party (SSNP), said.

Assad’s fate has been an obstacle in the Syria peace talks for a long time, with Barack Obama's administration and its allies insisting that he must step down, and Russia saying that the people of Syria are the ones who should decide on Assad’s future.

The Wrath of Euphrates operation, aimed at liberating Raqqa, the de facto IS capital in Syria, was launched in November 2016 by the Kurdish-led Syrian Democratic Forces (SDF). The Pentagon confirmed that US military advisers, aircraft and artillery were deployed to Syria to "train, advise and assist" the SDF and allied troops.

000000
Popular comments
the world knows America's true intentions: use ISIS as a cover to secretly train, incite, and recruit death squads to overthrow Assad. The only question left is whether Trump will adhere to his campaign promises and leave Syria without interfering.