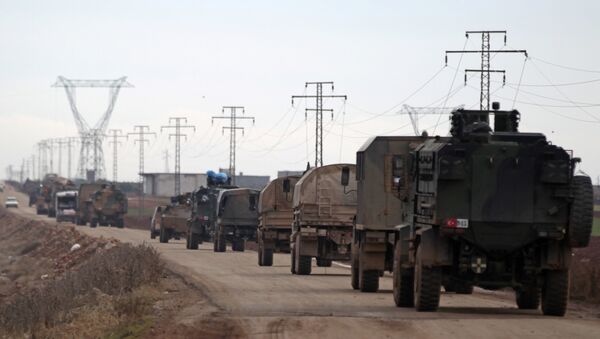 On Wednesday, Turkey's National Security Council announced the end of Operation Euphrates Shield, or the Turkish military intervention in Syria. The Council emphasized that the campaign had achieved its immediate objectives of ensuring national security, beating back Daesh and seeing the return of Syrian refugees to their homes in and around the border area between Turkey and Syria.

Turkey Ends Its Military Operation in Syria After Reaching 'Its Immediate Goals'
"Thanks to Euphrates Shield, we have secured an area of 2,015 square kilometers by capturing al-Bab," Prime Minister Binali Yildirim said, speaking about the results of the military campaign on Thursday. "The Free Syrian Army (FSA) has been settled there. Syrians in Turkey have returned and life has returned to normal," he added.

However, as geopolitical analyst Gevorg Mirzayan has pointed out, the fact is that the success or failure of Turkey's operation should be measured "not by the size of the occupied territory, but the realization of the goals which were set out before the start of the operation." In this regard, Ankara's accomplishments look less impressive. In fact, the analyst suggested that Turkey has essentially found itself in something akin to a geostrategic Catch-22.

Naturally, some of Ankara's goals, including the imperative of pushing Daesh (ISIL/ISIS) terrorists away from the Turkish border, have been achieved.

"Another important goal," according to Mirzayan, "was to grow [President] Erdogan's political rating. The Turkish leader faces the most important constitutional referendum of his political career, after which he will either be made president with extremely broad powers (factually a modern-day sultan) or demonstrate his political weakness and be forced to fight off his emboldened opponents from both within and without the country." 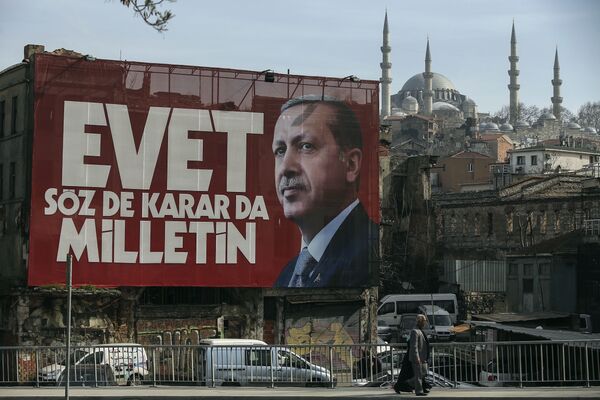 "There is no doubt that Turkey's military victories in Syria (which have been inflated and sensationalized by the government-controlled media) have boosted the reputation of the head of state, and hence the chances of a successful outcome for Erdogan's referendum," the analyst noted.

Train, Advise, Assist? US Marines Deployed to Syria Spotted on Raqqa Frontline
The next success, at least on first impression, is the mission's goal of preventing the creation of a Kurdish-controlled zone stretching along the Turkish-Syrian border. Now, Mirzayan explained, "thanks to the territories controlled by the 'Greens' (i.e. the Ankara-controlled fighters from the FSA), the Kurdish enclaves have been effectively split in two."

The reality however is not so clean cut, according to the analyst. "First of all, the Kurds have found a common language with Damascus, and Kurdish territories are able to communicate with one another via the Syrian government-controlled territory."

"Secondly, the Turks were unable to inflict a serious military defeat on the Kurds, or to push them beyond the Euphrates." Instead, an unlikely pairing of the US and Russia came to the Kurds' assistance. 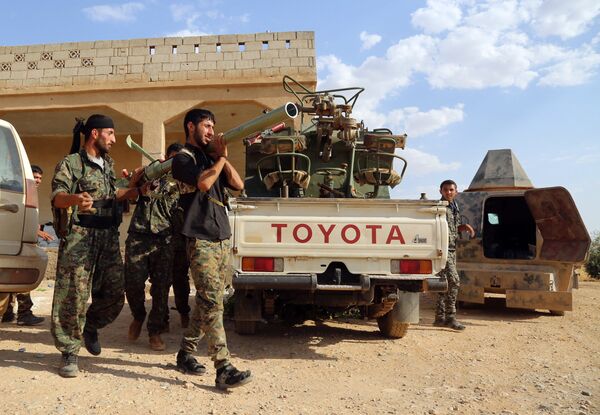 US-backed Kurdish and Arab fighters prepare a rocket-launcher as they advance into the Islamic State (IS) jihadist's group bastion of Manbij, in northern Syria (File)
© AFP 2022 / DELIL SOULEIMAN

Accordingly, Mirzayan noted that "factually, Operation Euphrates Shield was terminated because the Turkish Army had reached the limits of its potential for territorial expansion. From both the east and the west the Turks were surrounded by 'untouchable' Kurds; in the sound is the Syrian Army, which took advantage of Turkey's campaign against Daesh to free much of Aleppo province and to advance to the shores of the Euphrates."

What Could Prompt Turkey to Launch Operation Euphrates Shield 2.0
Another key aim of the Turkish campaign was to flex its military muscle – to demonstrate that the second-largest NATO army was fit for combat. "The problem," Mirzayan recalled, "was that over the last decade, the army almost hasn't fought (except against the Kurds on its own territory, or against each other during the recent failed coup attempt)." During the same period, authorities have dismissed or even jailed a significant number of top generals and officers affiliated both with the Gulen Islamists and the Kemalist Republicans.

"Therefore, Erdogan…decided to demonstrate his army's fighting efficiency in the front against Daesh." However, the expert noted that here too, "things have not turned out so well." 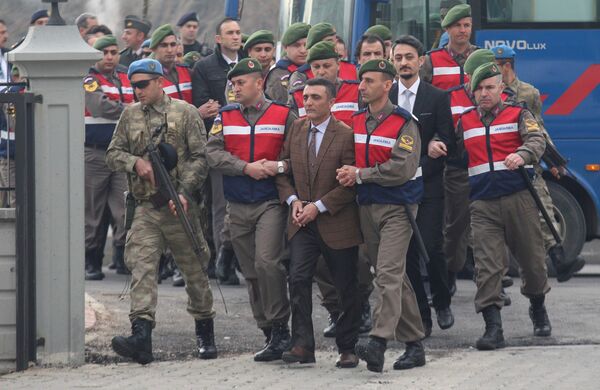 Zekeriya Kuzu, one of the main suspects accused of attempting to assassinate Turkish President Tayyip Erdogan on the night of the failed last year's July 15 coup, and the other soldiers are escorted by Turkish gendarmes as they arrive for the first hearing of the trial in Mugla, Turkey, February 20, 2017
© REUTERS / Kenan Gurbuz

"First off, two thousand square kilometers and the city of Al-Bab were 'liberated' over the course of six months. Second, over these six months, the army lost 70 troops, according to official figures –twice more than Russia's losses in its year-and-a-half long operation. And that's taking into account the fact that Ankara used [FSA] infantry on the frontlines, and that these troops showed themselves to have extremely poor combat capability, and subsequently lost between 500 to several thousand fighters."

Finally, in another blow to the army's prestige, Mirzayan recalled that "Daesh managed to destroy several dozen Turkish armored vehicles, including the much-hyped Leopard tanks." In other words, "the game of muscle-flexing did not turn out to be so impressive."

In geopolitical terms, the analyst admitted that there is no doubt that Turkey's incursion into Syria has significantly raised Ankara's importance in resolving the Syrian conflict, allowing it to become part of the triumvirate along with Moscow and Tehran in talks to resolve the Syrian crisis.

On the other hand however, "Turkey has failed to flex its political muscle vis-à-vis the Americans and, in President Erdogan's own words, to force Washington to make a strategic choice between support for its Turkish allies and the 'Kurdish terrorists'. Moreover, one gets the impression that Washington has chosen in favor of the Kurds, supplying them with weapons and entrusting them with the liberation of Raqqa. Turkey has been left only with a piece of Syria."

Trump's New Policy on Assad Lets US Focus on Anti-Daesh Fight - Ex-CIA Officer
At the moment, the expert suggested that the central question revolves around what Ankara will do with the territory under its control. Continued occupation is impossible, he noted, "because doing so would be going against many forces pushing for an integral post-war Syria."

"Furthermore, the Arabs too will not understand such an occupation, seeing it as the start of Turkish military expansionism (as a result of which Ankara's image will suffer significantly)." But Turkey can't simply abandon the territory either, "because any great power must bear responsibility for those whom it comes to control."

"Today, the so-called Free Syrian Army – which is really a collection of armed gangs, controls the region only with the help of Turkish support and Turkish troops. As soon as the Turks are gone, these fighters will immediately be thrown out of the territory they control either by the Kurds from the east (thus uniting the Kurdish regions) or by Syrian pro-government troops from the south."

Accordingly, Mirzayan stressed that ultimately, "Ankara has only one option: to exit with dignity, within a framework agreed to with Damascus, Moscow, and Tehran which is well-publicized and [mutually] advantageous" to all parties involved. 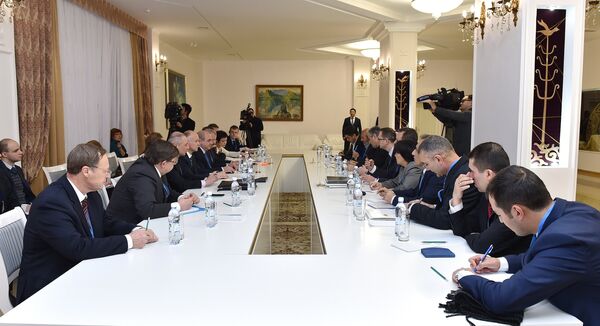