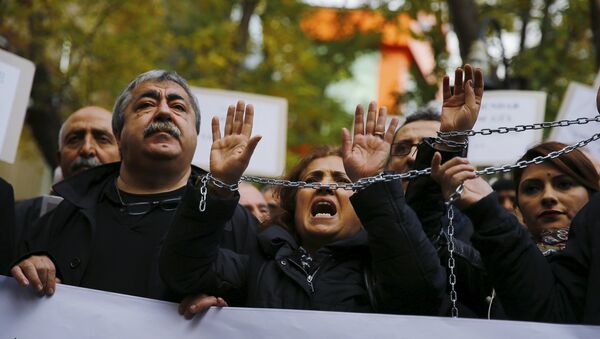 © REUTERS / Umit Bektas
Subscribe
Istanbul’s Chief Prosecutor’s Office has ordered the re-arrest of 21 journalists who were supposed to be released from detention by order of an Istanbul court. The journalists had been detained in connection with the failed coup attempt in Turkey last year.

Kurdish Artist Gets Three Years in Jail for Painting Turkish Forces' Destruction
Twenty-one journalists have been re-arrested after Istanbul's High Criminal Court ordered them to be released from detention, where they were kept for several months on suspicion of being linked to the failed coup attempt last year.

The court's decision was reversed by the Chief Prosecutor's Office in Istanbul, which claimed new had evidence emerged and that the journalists would face new charges now. According to a Middle East Eye report, the journalists will face charges of attempting to overthrow the government last year.

"The families of the journalists had gathered in front of the gates of the Silivri Prison, west of Istanbul, to take them home after eight months in jail, but they were left waiting with no explanation on why the release had been delayed," the MEE report reads.

The Committee to Protect Journalists (CPJ), an international organization, has called on Turkish authorities to release and drop charges against all journalists currently in detention.

"The unprecedented crackdown on the press has deprived Turkish citizens of independent coverage on subjects of vital public interest and has contributed to the rapid decline of democratic governance in the country," said Nina Ognianova, CPJ Europe and Central Asia Program Coordinator.

Journalists in Turkey are currently facing a harsh crackdown from the Turkish government. The official position of the Turkish government is that journalism is used as a disguise for terrorists and militants who seek to overthrow President Recep Tayyip Erdogan. In March, speaking at one of his regular meetings with mukhtars [neighborhood heads] at the presidential palace in Ankara, Erdogan reportedly called the arrested journalists "thieves, child abusers and terrorists."

"I say, ‘Give me the list of jailed journalists," Erdogan said, according to the media reports. "I look at the list and see that all of them are thieves, child abusers or terrorists. Recently, a 149-person list [of jailed journalists] arrived. When you look at the crimes they committed, they include bringing bomb mechanisms from northern Iraq to Turkey; another one's crime was to carry out an armed attack on a police vehicle. Another one was arrested with explosives.

"We will never concede concessions to those who act as militants of terrorist organizations and agents for foreign [intelligence] agencies under the guise of media membership," he added, according to The Globe Post.