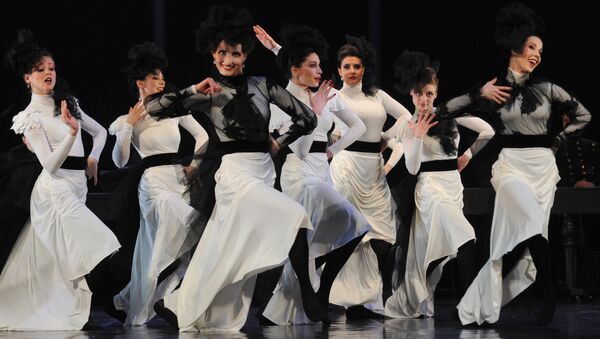 © Sputnik / Vladimir Fedorenko
/
Go to the photo bank
Subscribe
A screening of the Vakhtangov Theater’s dance production of Anna Karenina filmed live by the US company Stage Russia HD was held at the Russia Russian Cultural Center in Washington on Friday.

Russian Cultural Center in Washington to Host St. Albans School Christmas Tour
While it is the first the Washingtonians were treated to the film, it has been screened in some 30 US cinemas, including in Los Angeles, San Francisco, Chicago, San Diego, Seattle, Washington, New York, Miami, Pittsburg, and Cleveland.

Producer and company's founder Edward Aronoff told Sputnik that the Vakhtangov Theatre's interpretation of Anna Karenina has been received by ten US audience very well, and some cinemas even ask for additional screenings.

Aronoff added that Anna Karenina is one of the four films the company has presently out in the cinemas. The three others include the Vakhtangov Theatre's Eugene Onegin, the Moscow Art Theatre's Cherry Orchard, and MTuZ's The Black Monk.

Stage Russia HD films stagings from Russia's most renowned theater companies and then shows them in HD into US, UK and Irish movie theaters.

Aronoff noted that the project was born two years ago with the idea of bringing live Russian theatre to the United States.

"The logistics of repertory theatre in Russia doesn't make that possible, so the best next thing, I thought, was to film the productions," he explained. "It [filming productions] is even better in a way because it's a different experience and also can be shown simultaneously throughout the US."

"I started this because I love Russia. It's my opportunity to bring a little piece of Russia back home," Aronoff added. "The goal of the project is to educate, promote Russian culture and build bridges between the two countries."

The producer said that at the moment some 75 percent of the audience are Russian Americans, and pointed out that the western audience is growing. He also shared that they are expanding and will be organizing screenings in China, Australia, Latin America, and Scotland.

Aronoff also shared his plans to start working with the Lensovet Theatre in St. Petersburg next season in addition to the Moscow theaters. In September, Stage Russia HD plans to release Anton Chekhov's The Seagull staged by Satirikon, Vakhtangov's Uncle Vanya, and the Lensovet's Macbeth.Kino among others.